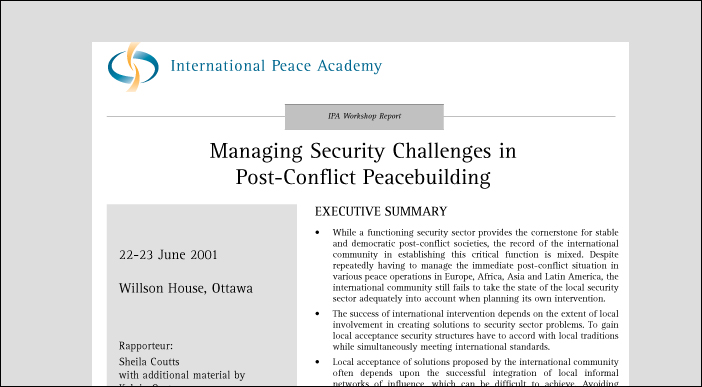 The meeting, generously hosted by the Canadian Government and held against the unfolding backdrop of the growing involvement in Macedonia of the North Atlantic Treaty Organization (NATO) and the European Union (EU), included 41 participants from a number of international organizations as well as government officials and academics. The group examined how the international community could best fill the postconflict security gap while at the same time creating a stable security environment to serve as the foundation for a society with functioning security institutions and a self-sustaining respect for human rights. The intra-state character of most conflicts in the last decade has often led to the virtual collapse of indigenous security structures. In the immediate postconflict environment crime, in all its manifestations, flourishes and local security structures are often inadequate, inappropriate or simply non-existent. Immediate postconflict situations therefore pose two problems to the international community: the short-term need to fill the security gap left by non-functioning local institutions, and the long-term goal of re-creating the local security sector.