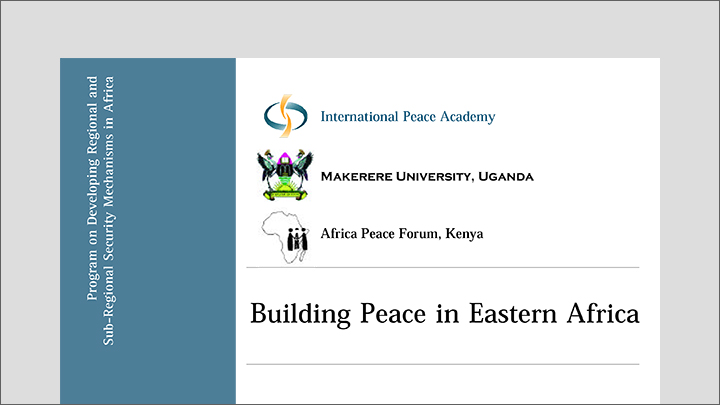 In collaboration with the Faculty of Social Sciences of Makerere University (Uganda) and the Africa Peace Forum (Kenya), the International Peace Academy [now International Peace Institute] hosted a seminar in Entebbe, Uganda, from December 16 to 18, 2002, to assess the challenges and opportunities for building peace in Eastern Africa. The seminar brought together about fifty diplomats, soldiers, civil society representatives, and academics, mostly from eastern Africa. Among these were Nuwe Amanya-Mushega, Secretary-General of the East African Community (EAC) and Legwaila Joseph Legwaila, the Special Representative of the United Nations (UN) Secretary-General for Ethiopia/Eritrea, who delivered the keynote address. The Entebbe seminar was the third in a series of three meetings organized by IPA in Africa under its Project on Developing Regional and Sub- Regional Security Mechanisms in Africa (2000-2003). IPA’s Africa program aims to identify and analyze the issues impeding the successful resolution of conflicts in Africa and works to strengthen sub-regional organizations.

Eastern Africa, Djibouti, Ethiopia, Eritrea, Kenya, Somalia, Sudan, Tanzania, and Uganda faces unique challenges and opportunities. Unlike West and Southern Africa, Eastern Africa lacks a potential regional hegemony like Nigeria and South Africa and has little regional peacekeeping experience. However, this subregion also occupies a new strategic position in America’s new war on terrorism. Eastern Africa has benefited from the renewed involvement of the UN and other external actors and enjoys a rich tradition of pan-Africanism. Against this background, participants in Entebbe discussed prospects for strengthening conflict management efforts in Eastern Africa through regional economic and political integration, improved management of ethnic identity issues, and the development of civil society participation in conflict management efforts. Significant obstacles to peace were identified in areas such as security sector reform, the massive number of small arms in circulation throughout the region, and uncoordinated regional policies on refugees in an area that has spawned Africa’s largest refugee population.