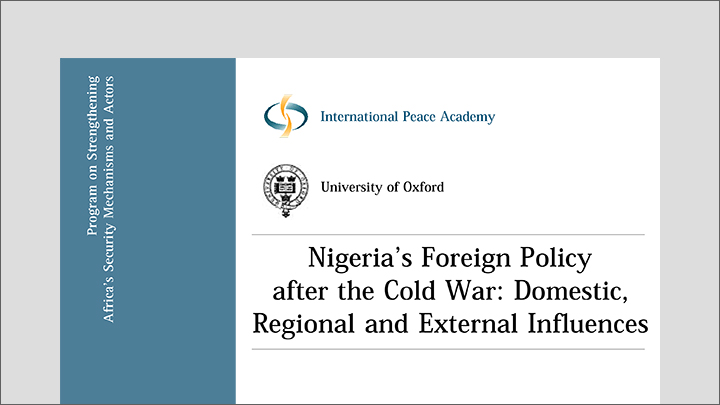 Oxford University’s Centre for International Studies and its Centre for African Studies held a seminar on the domestic, regional, and external dimensions of Nigeria’s foreign policy after the Cold War. The seminar took place at St. Antony’s College, Oxford, from July 11 to 12, 2003, and featured about forty participants, mostly scholars and practitioners, with many of them based in Nigeria.

At the heart of this conference on Nigeria’s foreign policy in the post-Cold War era was the question of whether a relatively resourceful and ambitious country like Nigeria can be a force for stability and democratization in Africa. This is an important question, given the enormity of Africa’s problems and the limited interest and commitment of many external actors to the continent following the end of the Cold War. The theoretical and practical aspects of Nigeria’s foreign policy, the institutions and processes of policy formulation, and the â€œconcentric circles of domestic, regional, and external influences on Nigeria’s foreign policy were therefore the major issues discussed during the conference.

The end of the Cold War has resulted in a fundamental change in the dynamics of contemporary international politics. Developing countries, like Nigeria, with oil wealth, a large army, and a large pool of well-educated citizens are now able to play a leadership role in Africa, due to the reduced strategic significance of the continent for major external powers. However, while policymakers and executors of Nigeria’s foreign policy appear to be committed to responding to demands, pressures and influences from the external environment to contribute to regional peacekeeping, they also need to respond appropriately to domestic pressures and influences, especially those derived from popular public opinion. A civilian regime, unlike military governments, also faces pressure from the parliament and the press.