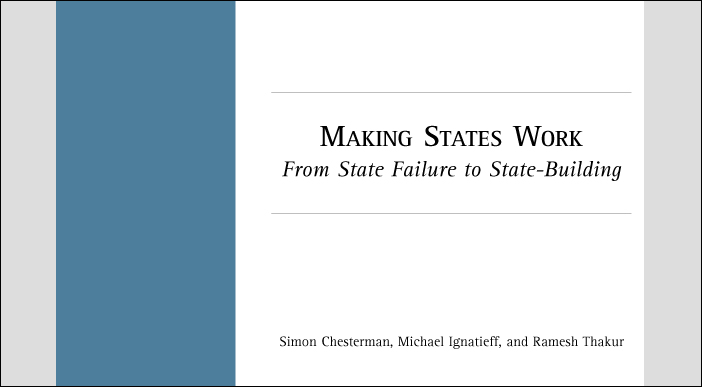 It is frequently assumed that the collapse of state structures, whether through defeat by an external power or as a result of internal chaos, leads to a vacuum of political power. This is rarely the case. The mechanisms through which political power are exercised may be less formalized or consistent, but basic questions of how best to ensure the physical and economic security of oneself and one’s dependants do not simply disappear when the institutions of the state break down. Non-state actors in such situations may exercise varying degrees of political power over local populations, at times providing basic social services from education to medical care. Even where non-state actors exist as parasites on local populations, political life goes on.

A basic question confronting outside actors is whether to engage in top-down or bottom-up policies: to strengthen institutions and leaders, or foster a functioning civil society in the hope that this will cultivate enlightened leadership in the long term. The sobering assessment that emerges from this project is that statebuilding works best when a population rallies behind an enlightened leader, but very little at all will work if they rally behind one who is not.

States cannot be made to work from the outside. International assistance may be necessary but it is never sufficient to establish institutions that are legitimate and sustainable. This is not an excuse for inaction, if only to minimize the humanitarian consequences of a state’s incapacity to care for its vulnerable population. Beyond that, however, international action should be seen first and foremost as facilitating local processes, providing resources and creating the space for local actors to start a conversation that will define and consolidate their polity by mediating their vision of a good life into responsive, robust, and resilient institutions.