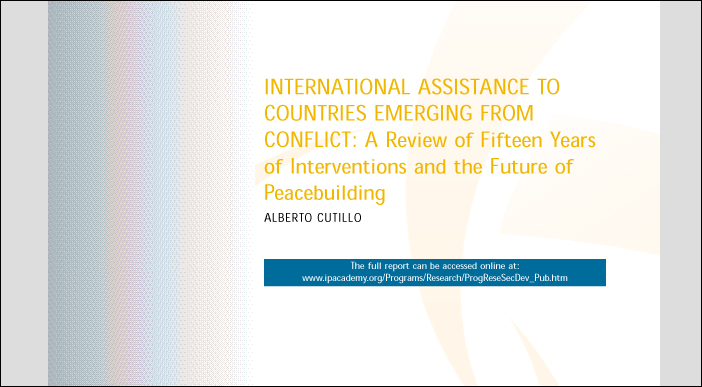 The establishment of a Peacebuilding Commission is regarded by many as the most prominent achievement of the September 2005 World Summit at the United Nations (UN). With attention now focused on the operationalization of the Peacebuilding Commission, together with the Peacebuilding Support Office and a Standing Fund for Peacebuilding, this paper provides a far-reaching review of the main features and trends in international assistance to countries emerging from conflict over the last fifteen years. The paper traces the evolution of international peacebuilding and identifies key gaps that require continuing attention in the future. In spite of the considerable efforts and resources invested in years of practice, it is widely recognized that peacebuilding activities so far have been undertaken by a multitude of actors in absence of an overall political strategy. The main challenges are not the lack of a theoretical basis and lessons learned, but rather the failure to produce from them a commonly agreed doctrine and to translate it into meaningful guidelines on the ground.

This paper argues that though progress is being made on the ground, the United Nations system and donor agencies have failed thus far to address satisfactorily three gaps discussed in the paper: political leadership, strategic coordination, and a comprehensive financial mechanism. The creation of the Peacebuilding Commission may represent a historical opportunity to improve the international response to postconflict countries. While this paper does not focus directly on the Peacebuilding Commission, it does question whether the new Commission will succeed in effectively addressing the main gaps identified above. Because many modalities of the Commission are still under discussion at the moment of writing, it is difficult to assess how the Commission will operate, much less its impact on the ground. However, if the past is any guide, it appears that the UN system will still be struggling with these shortcomings after the establishment of the Commission.