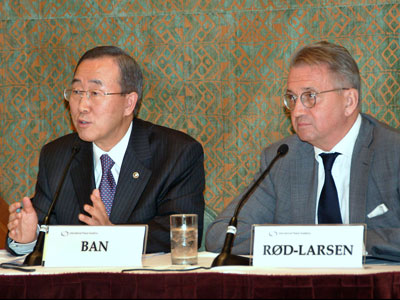 This meeting was a further opportunity to have a conversation with one of the official candidates on the future challenges of the world organization and the role of the Secretary-General.

The event is the third part of the IPA Secretary-General Candidate Conversation Series.

With the term of Secretary-General Kofi Annan coming to an end later this year, there have been increased calls for more transparency and accountability in the selection process. Yesterday, the Security Council held its second straw poll of the current slate of candidates and the process is currently entering into its hot phase. After similar IPA-events with Sri Lanka’s candidate Jayantha Dhanapala in mid-June and India’s candidate Mr. Shashi Tharoor earlier this month, this meeting will be a further opportunity to have a conversation with one of the official candidates on the future challenges of the world organization and the role of the Secretary-General. Please note, the International Peace Academy has no position on the process and does not endorse any specific candidate.

H.E. Mr. Ban Ki-Moon, Minister of Foreign Affairs and Trade of the Republic of Korea since January 2004, brings to his post 35 years of distinguished service both in the government and on the global stage. A Harvard educated career diplomat, Minister Ban’s first overseas posting was in New Delhi, where he was able to acquire first-hand experience on development issues. His bilateral assignments also include two terms in Washington DC. From 1990 to 1992, he served as Director-General of American Affairs of the Foreign Ministry. In 1995, he joined the top management of the Ministry as Deputy Minister for Policy Planning and was one of the key players in the founding of ASEM for Asia-Europe Cooperation. He was appointed National Security Advisor to the President in 1996 and became Vice Minister in 2000. His most recent assignment was as Foreign Policy Advisor to the President.

Minister Ban’s longstanding ties to the United Nations date back to 1975 and include assignments as First Secretary at the Permanent Observer Mission of the ROK to the UN in New York, Director of the UN Division at headquarters, and Ambassador to Vienna, during which time he served as Chairman of the Preparatory Commission for the Comprehensive Nuclear Test Ban Treaty Organization (CTBTO) in 1999. As Chef-de-Cabinet to the President of the 56th session of the UN General Assembly held by the ROK, he put his diplomatic and leadership skills to the test in engendering the spirit of cooperation and unity among Member States in an extraordinary year for the global body in the aftermath of the September 11th terrorist attacks.

This event was chaired by IPI’s President, Terje Rød-Larsen.