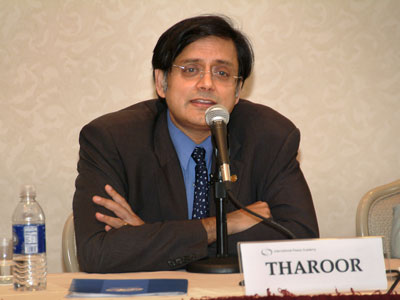 This meeting was a further opportunity to have a conversation with one of the official candidates on the future challenges of the world organization and the role of the Secretary-General.

With the term of the Secretary-General Kofi Annan coming to an end later this year, there have been increased calls for more transparency and accountability in the selection process. The Security Council, in late July, held its first straw poll of the current set of candidates and the process is expected to enter into its hot phase very soon. After a similar IPA-event with Sri Lanka’s candidate Jayantha Dhanapala in mid-June, this meeting will be a further opportunity to have a conversation with one of the official candidates on the future challenges of the world organization and the role of the Secretary-General. Please note, the International Peace Academy has no position on the process and does not endorse any specific candidate.

Shashi Tharoor is the current Under-Secretary-General for Communications and Public Information and has led the Department of Public Information (DPI) since January 2001. Prior to joining DPI, Mr. Tharoor served as Director of Communications and Special Projects in the Office of the Secretary-General and as Executive Assistant to the Secretary-General (1997-2001). He was also the Special Assistant to the Under-Secretary-General for Peacekeeping Operations (1989-1996); and from 1991 to 1996, he led the team in the Department of Peacekeeping Operations (DPKO) responsible for the United Nations peacekeeping operations in the former Yugoslavia. Mr. Tharoor’s United Nations career began in 1978 on the staff of the United Nations High Commissioner for Refugees (UNHCR) in Geneva. He was Head of the UNHCR office in Singapore (1981-1984) during the peak of the Vietnamese “boat people” crisis. Mr. Tharoor is also the author of eight books, as well as numerous articles, op-eds and literary reviews in a wide range of publications.

This meeting was chaired by IPA’s President, Mr. Terje Rød-Larsen.