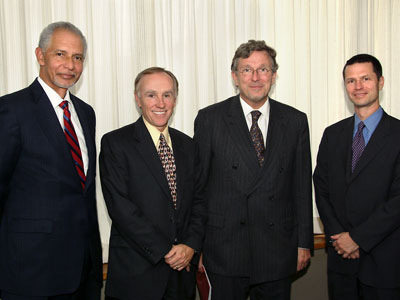 This IPI Policy Forum launched a new report by the Center on Global Counterterrorism Cooperation on Standards and Best Practices for Improving States’ Implementation of United Nations Counter-Terrorism Mandates.

In the aftermath of the 9/11 attacks, Security Council Resolution 1373 imposed a set of complex counter-terrorism obligations on all Member States. The Council’s Counter-Terrorism Committee and its Executive Directorate (CTED) have been established to monitor compliance and help Member States implement the resolution’s requirements. The present report, commissioned by the Netherlands Ministry of Foreign Affairs, discusses the development of standards and best practices, which could help guide the CTC’s work and would facilitate efficient delivery of technical assistance. The importance of identifying and disseminating such standards and best practices was recently amplified by the United Nations Global Counter-Terrorism Strategy adopted earlier this month by the General Assembly. The report proposes a framework of such core standards and best practices and argues, inter alia, that their formal endorsement by the Security Council would significantly improve the UN’s efforts in this field.

This IPI Policy Forum provided a venue to discuss the report’s findings and recommendations, and was introduced by David Cortright, President of the Fourth Freedom Forum and its recently established Center on Global Counter-Terrorism Cooperation. Jody Myers, Deputy Assistant General Counsel at the International Monetary Fund, offered the perspective of a technical assistance provider and Curtis Ward, Senior Research Analyst at Security Council Report and former expert with the CTC, served as a discussant. H.E. Mr. Frank Majoor, Permanent Representative of the Netherlands chaired this Panel.