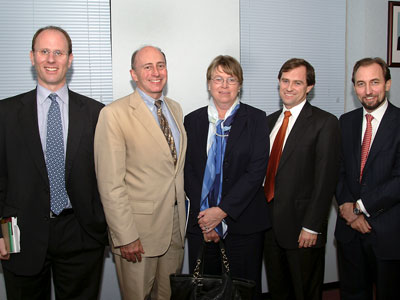 IPI and the Century Foundation co-hosted a policy forum to discuss, five years after the attacks on 9/11, The Global Fight Against Terrorism: How Relevant is the UN?

To help frame the discussion, Alistair Millar and Eric Rosand of the Center on Global Counterterrorism Cooperation authored a new report for the Century Foundation, “Allied Against Terrorism: What’s Needed to Strengthen Worldwide Commitment?”

We had an exceptional panel to provoke lively discussion around the table including Ellen Margrethe Loj, Denmark’s Permanent Representative and Chair of the Security Council’s Counter-Terrorism Committee, Prince Zeid al-Hussein, Jordan’s Permanent Representative, an important voice on the UN’s role in suppressing terrorism, and Robert Orr who has played a key role inside the Secretariat in developing the Secretary-General’s counterterrorism strategy and his broader UN reform proposals.