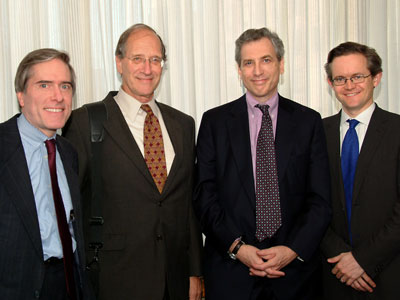 IPI was pleased to host the launch of a new book by James Traub entitled The Best Intentions: Kofi Annan and the UN in the Era of American World Power.

Kofi Annan, a recipient of the Nobel Peace Prize, has been heralded as a “diplomatic rock star” and as a “secular pope.” Yet despite much public praise he, and the institution he has come to embody, have faced increasing public scrutiny and criticism after a series of scandals, management failures, and rifts among key UN member states. The US invasion of Iraq without Security Council approval deeply shook Annan. Critics, and even some friends, began asking whether this sixty-year-old experiment in global policing had outlived its usefulness. Do its failures arise from its own structure and culture or from a clash with an American administration determined to go its own way in defiance of world opinion?

In The Best Intentions, Jim Traub recounts the dramatically entwined history of Kofi Annan and the UN from 1992 to the present. In Annan he sees a tension between high idealism and entrenched institutional practice. On the one hand, Annan represents both a conscientious idealist given too little credit for advancing causes like humanitarian intervention. On the other hand, he represents a UN careerist who has absorbed the institution’s culture and cannot, in the end, escape its limitations.