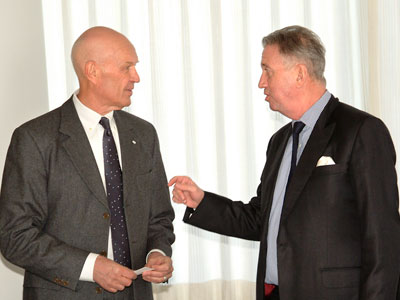 Before assuming his post as SRSG in 2005, Pierre Schori had a distinguished career in politics, diplomacy, and academia. In Sweden, Mr. Schori served as a Member of Parliament (1991-1994); Minister for International Development Cooperation; Deputy Minister for Cooperation with Central and Eastern Europe (1994-1996); Minister for International Development Cooperation, Migration and Asylum Policy and Deputy Foreign Minister (1996-1999). Subsequently, Mr. Schori served as a Member of the European Parliament (1999-2000) and as the Permanent Representative of Sweden to the United Nations (2000-2004). Before being nominated as SRSG, Pierre Schori was a Distinguished Visiting Professor at Adelphi University in New York. Mr. Schori has authored several books and articles on the United Nations, security policy, Africa, and Latin America.

This meeting was chaired by IPI President Terje Rød-Larsen.