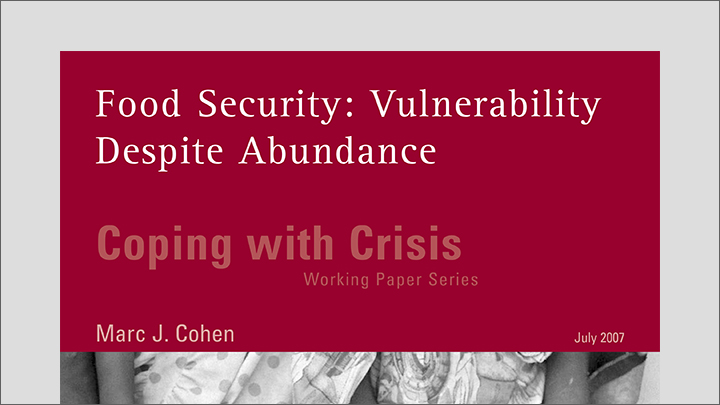 The world has made significant progress against food insecurity over the past thirty-five years, thanks to investments in agricultural productivity, infrastructure, health, education, and food-related social programs. However, since 1995, food insecurity has increased in developing countries. With business as usual, there is no chance of meeting the 1996 World Food Summit target of cutting hunger in half from 1990 levels by 2015. Depending on the patterns of global policy, public investment, and institutional development, the prospects for food security may remain dim well beyond that year. This has serious implications for global security, particularly human security.

Global food availability is more than adequate to provide everyone with her or his minimum requirements of 2,200 calories per day, and is projected to remain so in all developing regions through 2015. During the present decade, world harvests and stocks of cereals—the main source of calories—have stayed abundant, with all-time record output in 2004. Supplies of root and tuber crops—key staples for the poorest people in the low-income countries—are likewise favorable. The equal access to food picture is far less rosy: hundreds of millions of people in developing countries consume less than their minimum calorie requirements, because they lack either the income to buy available food or the resources to produce food for themselves. According to the Food and Agriculture Organization of the United Nations (FAO), in 2003, the last year for which data is available, 820 million people in developing countries experienced food insecurity.