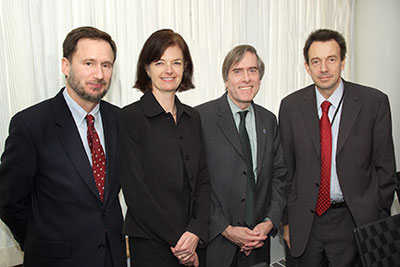 IPI held a book launch for Friends Indeed — The United Nations, Groups of Friends, and the Resolution of Conflict (Washington, DC: USIP Press, 2007) by Teresa Whitfield, Director of the Conflict Prevention and Peace Forum at the Social Science Research Council.

The book examines how groups of states work together to address violent conflict and broker peace. Referred to as “friends” of the UN Secretary-General, these groups have had a mixed record of success in engaging the UN and supporting peacekeeping missions. Whitfield, a former official in the UN Department of Political Affairs (1995-2000), explains why this has been the case and what can be done to remedy the situation in the future. In addition to Ms. Whitfield, panelists included H.E. Mr. Peter Maurer, Permanent Representative of Switzerland to the United Nations, Michael W. Doyle, Harold Brown Professor of Law and International Affairs at Columbia University, and Dr. Edward C. Luck, IPI Vice President and Director of Studies.