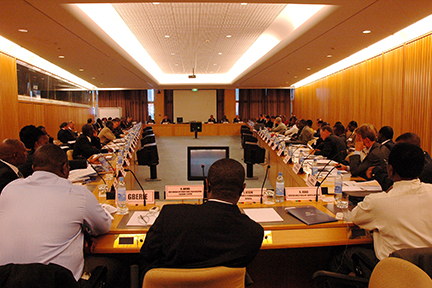 The International Peace Institute, in cooperation with the UN Departments of Political Affairs and Peacekeeping Operations, and the African Union (AU), convened a high-level workshop on November 7th-8th in Addis Ababa, Ethiopia, titled “The Ten-Year Capacity Building Programme: Towards a Broader Understanding of AU-UN Cooperation.”

The workshop was held on the first anniversary of the “Enhancing UN-AU Cooperation” declaration, which was signed by then UN Secretary-General Kofi Annan and AU Chairperson Professor Alpha Oumar Konare on November 16, 2006, in Addis Ababa. The declaration, which is to enable the AU to benefit from the expertise of the UN in peace, security, conflict resolution, and other areas, was in part inspired by the call at the 2005 World Summit for forging better partnerships between the UN and regional organizations.

To date, AU-UN collaborations have been largely impromptu, driven by operational exigencies and pursued through ad hoc mechanisms. Successful responses to protracted conflicts in Sudan, Somalia and elsewhere on the continent require a more structured approach. In this vein, the workshop addressed the following questions: What have been the most significant obstacles to achieving field-level cooperation? How can the UN, EU, and national governments help build the capacity of the AU? And more specifically, under what circumstances would the UN fund peace operations led by regional organizations? Among the key recommendations were the needs to narrow down the priorities of the ten-year plan to make implementation more effective; to urgently enhance capacity building and training in mediation and prevention; and to focus on conflict triggers in Africa including poverty, exclusion, and perceptions of injustice.

A report summarizing the proceedings of the workshop will be published in 2008. Core participants will also meet in New York in early 2008 to refine the strategy and recommendations provided in Addis Ababa.

Support for the workshop came from the governments of Canada and the Netherlands.