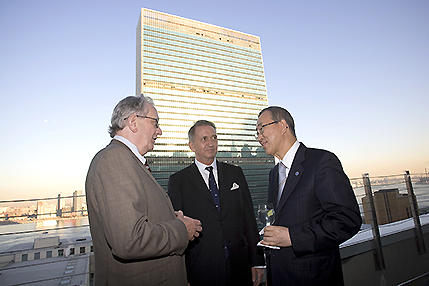 The Turtle Bay Club is a new series of evening receptions hosted by IPI at its new conference facility, the Trygve Lie Center for Peace, Security, and Development. Each reception features a leading personality in international affairs speaking on current issues and engaging with a select group of Ambassadors and other members of the UN Community.

UN Secretary-General Ban Ki-moon was the guest of honor for the inaugural meeting of the new series on April 17, 2008. He congratulated IPI for its new conference center and spoke about some of his priorities for the UN, including climate change and food security.

Following the Secretary-General’s remarks there was a lively question and answer session, moderated by IPI President Terje Rød-Larsen.