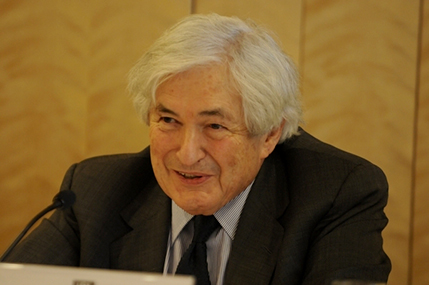 On December 12th, IPI hosted a meeting of its Forum on World Affairs to discuss the global financial crisis with keynote speaker James D. Wolfensohn, former President of the World Bank: “Global Financial Meltdown: Where are We Now? Where do We Go?”

The goal of the meeting was to develop a better understanding of the extent of the financial crisis, its effects on the world economy, its probable duration, and a possible way out. It also was an opportunity to exchange views on the political aspects of the crisis: How are international institutions reacting to the meltdown? What are the consequences for international trade and foreign aid? Are there potential implications for international security?

IPI invited James Wolfensohn to discuss these issues with participants, and to share his unique perspective as a Wall Street investment banker, President of the World Bank from 1995 to 2005, and Special Envoy for Gaza Disengagement in 2005-2006. Mr. Wolfensohn is currently chairman of Wolfensohn and Co., an investment and advisory firm focused on emerging market economies.

Mortimer Zuckerman, Editor-in-Chief of US News & World Report, also joined the meeting as a special guest.

The Forum on World Affairs is a series of high-level roundtable meetings hosted by IPI for a select group of UN Ambassadors, senior officials from the UN Secretariat, and other guests by special invitation. Each of these meetings focuses on a major international peace-and-security issue and offers an opportunity for dialogue with leading personalities from around the world. The meetings are held under the Chatham House Rule.

After the meeting, IPI Vice President and Director of External Relations Warren Hoge interviewed Mr. Wofensohn. You can find an edited transcript of the interview here.