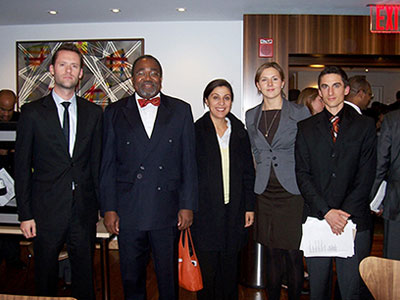 On December 4, 2008, Joint AU-UN Special Representative for Darfur and Head of the African Union–United Nations Hybrid Mission in Darfur (UNAMID), Rodolphe Adada, addressed a select group of diplomats and other members of the United Nations and NGO communities in IPI’s Trygve Lie Center.

Introduced by IPI President Terje Rød-Larsen, Mr. Adada spoke of his personal experiences in leading the joint efforts of the African Union and United Nations in war-torn Darfur since 2007, including the challenges in his mandates to support the implementation of the Darfur Peace Agreement and to contribute to the protection of civilian populations under imminent threat of physical violence.

Mr. Adada, prior to his appointment as Joint Special Representative for Darfur, served for ten years as Minister for Foreign Affairs, Cooperation, and Relations with Francophone Countries of the Congo and has been adviser to President Denis Sassou-Nguesso. His service with the Congolese government included the posts of Minister of Education and Minister of Mining and Energy.

The lunch-time event was part of IPI’s Special Representatives of the Secretary-General (SRSG) series.