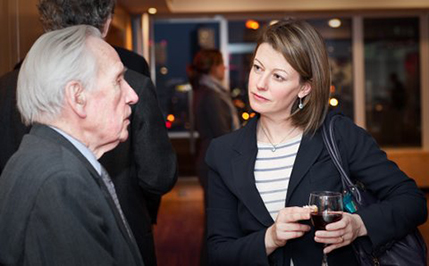 On February 24, 2009, IPI’s Turtle Bay Club gathered to mark the ninetieth birthday of Sir Brian Urquhart, lifelong supporter of the United Nations and IPI Board Member. At the event, held in IPI’s Trygve Lie Center, guests paid tribute to Sir Brian and reflected on his extraordinary career. Secretary-General Ban Ki-moon, unable to attend, delivered a video message to Sir Brian.

Born in Dorset, England, in 1919, Sir Brian Urquhart served in the British army and military intelligence during World War II. Sir Brian’s career following the Second World War has been described as a history of the UN itself. Indeed, he served as personal assistant to Trygve Lie, the first Secretary-General of the United Nations, before working in various capacities under Nobel Laureate Ralph Bunche. At this time, he became involved in a number of lasting projects initiated by the United Nations, including helping to establish and shape the first peacekeeping forces, advocating peaceful uses of atomic energy, helping resolve the Congo crisis in the early 1960s, and establishing peacekeeping missions in Cyprus, Kashmir, Lebanon, and the Middle East. He also served as Under-Secretary-General for Special Political Affairs from 1971-1985. He retired from the UN in 1986.