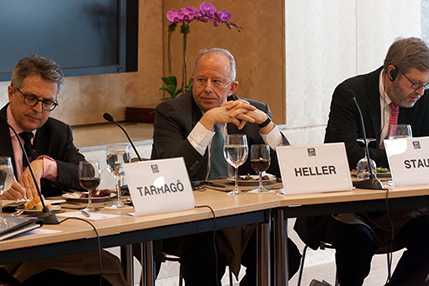 On February 12th, IPI’s Forum on World Affairs addressed “Sexual Violence in the Democratic Republic of the Congo: What Can Be Done?”

Dr. Denis Mukwege, founder of the Panzi Hospital in Bukavu, Democratic Republic of the Congo, was keynote speaker. Also speaking were Betty Bigombe, former Minister of State of Uganda and mediator in the conflict in North Uganda, John Sawers, Permanent Representative of the United Kingdom to the United Nations, and Eve Ensler, founder of V-Day, a movement to end violence against women and girls.

IPI’s discussion followed the adoption by the Security Council in June 2008 of Resolution 1820, which calls for the “immediate and complete cessation by all parties to armed conflict of all acts of sexual violence against civilians.”

Dr. Mukwege reported on sexual violence as a tactic of war in eastern Congo, and on the steps that are needed to address such violence. The Panzi Hospital, founded ten years ago, was originally a maternity hospital, but, facing unprecedented cases of rape, torture, and mutilation of women and girls due to the conflict in the Kivus, Dr. Mukwege decided to specialize in the treatment of the victims of rape and sexual violence.

Over the past twelve years, the Panzi Hospital has treated some 21,000 victims of rape and mutilation. Dr. Mukwege’s work has been widely recognized internationally, and last year he was awarded a United Nations Human Rights Prize. Previous recipients of the Prize include Nelson Mandela, Eleanor Roosevelt, and Martin Luther King.

For further information on the campaign to end sexual violence in the Democratic Republic of the Congo, visit V-Day or UN Action Against Sexual Violence in Conflict.

The Forum on World Affairs is a series of high-level roundtable meetings hosted by IPI for a select group of UN ambassadors, senior officials from the UN Secretariat, and other guests by special invitation. Each of these meetings focuses on a major international peace-and-security issue and offers an opportunity for dialogue with leading personalities from around the world. The meetings are held under the Chatham House Rule.