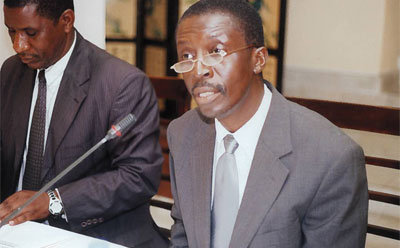 Impunity and justice have been hot topics in recent discussions about African politics and governance. The African Union (AU) Commission and the International Peace Institute (IPI) held an expert workshop in Monrovia, Liberia, in May 2009 to consider a paper on the question of ending impunity and promoting the pursuit of truth, justice, and reconciliation in Africa. The paper, commissioned by IPI on behalf of the AU, seeks to assist the AU Panel of the Wise, which has dedicated 2009 to examining this same question and is working on recommendations for ways to address these issues. Indeed, the Panel is hoping to bolster Africa’s role in leading the international community’s fight against impunity.

The paper was drafted by two leading African scholars: Dr. Gilbert M. Khadiagala, professor and head of the Department of International Relations at the University of the Witwatersrand, Johannesburg; and Dr. Comfort Ero, director of the Cape Town office of the International Center for Transitional Justice.

During the workshop, participants discussed concepts covered in the paper, including transitional justice as an integrated approach to addressing difficult political choices and assumptions underlying the distinction between peace and justice––i.e., whether the two are competitive or complementary goals.

Working group sessions also deliberated on mechanisms for strengthening African instruments for justice and reconciliation; international intervention and the challenges of mediating peace in Africa; and the potential of truth and reconciliation commission processes for countries such as Burundi, Kenya, Liberia, Togo, and Zimbabwe.

The role of the International Court of Justice (ICC)––and Africa’s consternation over some of its cases so far––was another important topic discussed at the workshop. In the years since its creation, four of the Court’s indictments have related to African countries: the Central African Republic, the Democratic Republic of the Congo, Sudan, and Uganda.

The workshop brought together members of the AU’s Peace and Security, and Political Affairs Departments, as well as representatives from the United Nations, the Common Market of Eastern and Southern Africa, the East African Community, and more than a dozen African experts, nine representatives of international think tanks, and some foreign diplomats based in Monrovia. The Panel of the Wise was represented by Ms. Elisabeth Pognon, Benin’s constitutional court president; the AU by Dr. Admore Kambudzi, head of the Secretariat of the Peace and Security Council; and the Liberian government by the Solicitor General of that country, Counselor Tiawan S. Gongloe.