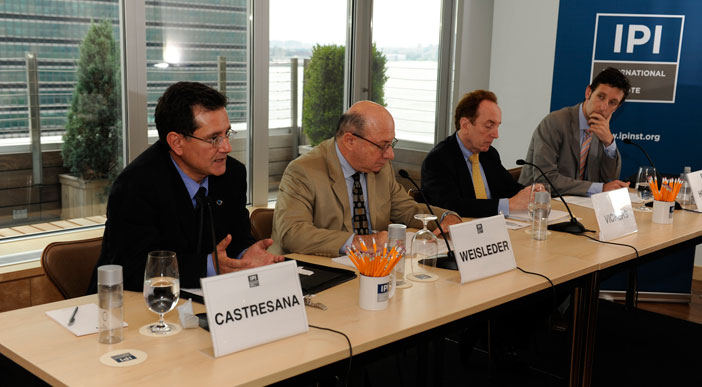 From left to right: Dr. Carlos Casteresana, the UN’s appointed head of the International Commission Against Impunity in Guatemala (CICIG); Saúl Weisleder, IPI; George Vickers of the Open Society Institute; and Andrew Hudson of Human Rights.

The head of a UN-mandated commission in Guatemala told an audience at IPI on Tuesday, July 7, 2009 that Guatemala’s economic elite has begun to understand the serious danger posed by international organized crime, and particularly narcotrafficking, and that the solution requires a stronger state capable of confronting it. Dr. Carlos Casteresana, the UN’s appointed head of the International Commission Against Impunity in Guatemala (CICIG), said this confrontation starts with a systematic head-on assault on impunity, employing the means of a modern state, which can also guarantee basic human rights and due process.

Dr. Castresana explained that CICIG’s strategy has been to start showing that nobody in Guatemala is above the law, and he mentioned various high profile cases that they have dealt with, in conjunction with the retrained and strengthened Guatemalan General Prosecutors’ Office. This has demonstrated to the people that they are complying with the mandate and responsibilities bestowed on them by the UN and the Guatemalan Nation.

Dr. Castresana also described the very weak situation of rule of law in Guatemala. The lack of independence for judges and members of the judiciary, insufficient training and objective and fair procedures for recruiting and maintaining public prosecutors and judges, as well as a serious lack of resources, including basic security in the middle of widespread operation by organized crime, has made this situation in Guatemala one of the contributing factors that has deepened the crisis of a historically weak state.

In spite of some reservations from the discussants and the attendees, based on Guatemala’s long history of unfulfilled promises and of other countries experiences, the Commissioner’s strong evidence, arguments and honest passion show definitive progress for a society that has lived in a social and political crisis for a long time, and needs other fundamental and sustained changes.

In this respect, one of the conclusions of the forum was that leaving a well-trained team of every type of professionals to make rule of law a reality is certainly a necessary result to consolidate the achievements reached up to now.

The forum “Confronting Organized Crime: Learning from the International Commission Against Impunity in Guatemala (CICIG)” was chaired by Saúl Weisleder of IPI. George Vickers of the Open Society Institute and Andrew Hudson of Human Rights First were the discussants.