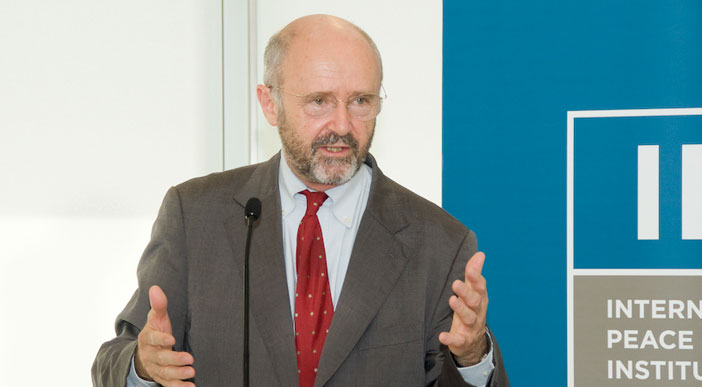 Brice Lalonde, Special Ambassador of France for the Climate Change Negotiation, discussed at IPI the current state of play in climate change talks in the lead-up to the UN conference on the subject in Copenhagen in December.

At the time of his talk, on June 25, 2009, Lalonde had just returned from a meeting of the Major Economies Forum in Mexico.

The Copenhagen Meeting: It’s a huge task, as you know, because we understand it’s completely reshuffling the world economy. It’s very technical, very complex, and it’s left to negotiators, which is a mistake. So heads of state have to [grab hold] of it, because the negotiators otherwise are going to steal the whole process and make it too complicated.

Goals: We know what the goal should be. Everybody knows, in 2050, we have to reduce by 50 percent globally all our emissions, and we know that for developed countries, it must be 80 percent. The task is 80 percent reduction by 2050 for all developed countries, which would mean a global reduction of 50 percent…It’s not, of course, easy to do, but this is what we have to do….That means that in 2025, for instance, in all countries of the world, emissions have to decline. Everybody sort of agrees with that.

Who’s responsible? That’s one of the problems we have, and coming from Mexico––where we had a Major Economies Forum––it was quite interesting to see [how we may look] for a center to find order from chaos. For instance, one delegation said, for the long-term goal, “Let’s ask the scientists.” So there is that sort of confusion: where politicians don’t know how to handle the scientific data, and, in fact, it’s not up to the scientists to tell people what to do. Rather, it’s the politicians who have the responsibility to say, “Okay, this is what we’re going to do.” And then we have no center in the sense that we don’t have a benevolent, neutral body, which would set a road map for every country and say, “This is what I suggest, I’m neutral.” No, it comes from each country, 190 countries which would give submissions, and we hope that the truth or the real thing will come out from that.

What will the future look like? This brings me to what I think is one of the most difficult problems: we don’t have an image of the future. We don’t have an image of a desirable, low-carbon future. How would it be? What would the day of Mr. Jones in the UK, or somebody in Africa, in 2060 living in a low-carbon society look like? How would we be living? How would we be producing? Nobody knows. This is very important in my view, because in history, all movements, all big steps, were always taken by people who thought that tomorrow would be better than today, and that you could accept some difficulties today because it’s going to be better tomorrow, and they had an image of how it would be tomorrow. We don’t have that.

The European Union:  I’m not allowed to talk on behalf of the European Union today, but I mean, we are quite happy because we have made a very strong decision by adopting a climate energy package. Twenty-seven countries, very different, some twice as rich as others, some completely coal dependent, some, I would say, nuclear dependent, and nevertheless, we got it, and we have the solidarity systems, money flowing from rich countries to less rich countries: different systems, which in our view, can be a model.

France: So we try in France to build some sort of an alliance, to bring the voice of Africa and of the small islands into the negotiation and to try to help them, because that’s the main problem which is also going to face us: food security and survival, in countries that are going to become much more arid.