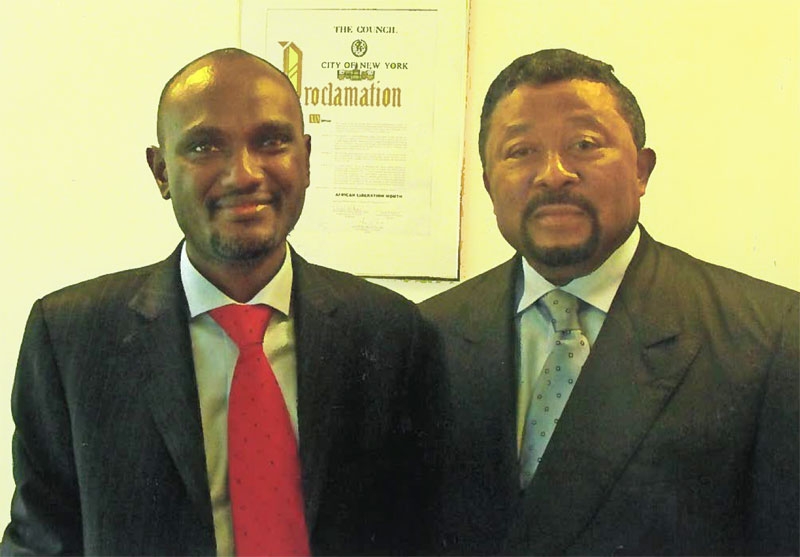 Jean Ping, the African Union Commission chairperson and former President of the UN General Assembly, made his comment about recent events in Guinea Conakry in an interview with Adonia Ayebare, the acting director of IPI’s Africa Program.

The interview took place at the AU mission to the UN in New York, where Mr. Ping was attending the opening of the United Nations General Assembly and preparing to attend the G-20 summit in Pittsburgh.

Additional issues covered in the interview included the meeting between US President Barack Obama and heads of states and governments from Sub-Saharan Africa and Africa’s participation in the G-20 meeting.

Here is a transcript of the conversation:

AYEBARE:  What transpired at the meeting between President Obama and African heads of state, which you attended?

PING: The fact that the meeting took place is a sign that big players in the international system like the United States of America take Africa seriously. Almost all the African countries  attended the meeting apart from those suspended by us for coups and other related matters like Mauritania, Madagascar and Guinea Conakry. The hosts also had concerns about some countries like Sudan and Zimbabwe and did not invite them.

On the deliberations, three African heads of states gave presentations. President Jakaya Kikwete of Tanzania focused on agriculture; President Ellen Johnson Sirleaf of Liberia on youth and women empowerment; and President Paul Kagame of Rwanda on the investment climate in Africa. Of course, the host, President Obama, made the opening remarks. Other heads of state had an opportunity to respond to the presentations by giving remarks at the end, which got positive responses. All in all, the meeting was excellent, and we need to institutionalize such gatherings. As you know, Africa participates in regular high level meetings with other major players in the international system like China and Japan.

AYEBARE: How did Africa fare in the G-20 meeting in Pittsburgh?

PING: In Pittsburgh, Africa was being admitted for the second time to a G-20 meeting. Unlike London, where the last US administration was clearly against Africa’s full participation, this time we fully participated in the preparations and discussions of the G-20. Africa’s delegation was led by Prime Minister Meles Zenawi of Ethiopia and was accompanied by me and other senior officials of the African Union Commission. The Prime Minister did an excellent job of articulating issues relating to Africa’s vital interests.

As you already know, the world has been hit by a financial crisis which has affected many parts of the world, including Africa. But the difference is that other countries — including the United States, China and others — have extra resources to bail their people and nations out of this mess.

But it is not yet clear who will bail out Africa, which, by the way, never caused this crisis. This issue was fully discussed at the G-20 meeting, and a couple of possible solutions were tabled. These included passing on special drawing rights that are not used by the developed countries to Africa, which some developed countries are considering doing. Capitalization of the African Development Bank and other issues related to the Bank’s work were fully discussed.

Also discussed was the capitalization of Africa by the International Monetary Fund through regional development banks, which has not been done. The Pittsburgh meeting reaffirmed this commitment. The United States raised the crucial issue of food security in Africa, which to me is a radical departure from the old policy of focusing on food aid only. This will be implemented under a new program called CADEP [Comprehensive Agriculture Development Program], and the AU will participate in this process.

AYEBARE: In the last 48 hours, the military government in Guinea Conakry shot dead over 150 unarmed demonstrators in the capital. What is the AU’s position on this matter?

PING: Before meeting you for this discussion, I was just meeting the Guinea Foreign Minister and his Ambassador at the UN, and I told them this is unacceptable and told them to make sure that it is not repeated. I said a lot of things to them that I cannot repeat in the open and the AU has issued a statement, which condemns this heinous act.  We are closely following the developments in that country and we shall take appropriate measures should the need arise.