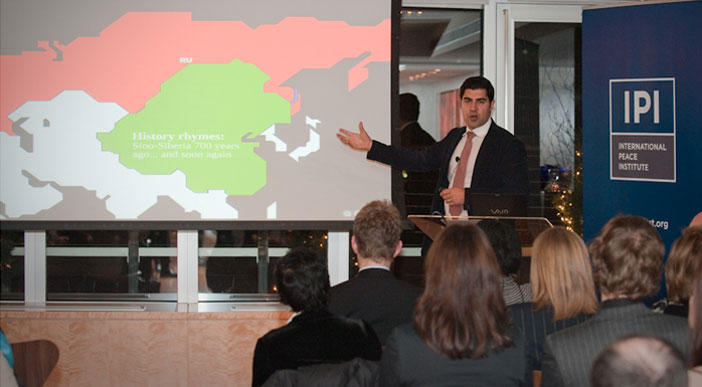 On December 7th at IPI the author and commentator Parag Khanna posed the question “Do We Live in a Borderless World?” and then offered up his answer in a slide show presentation that the evening’s moderator, IPI Vice President and Director of External Relations Warren Hoge, described as an “informative and audacious moving map show.”

“Watch Parag Khanna tonight as he makes existing countries take on new shapes and contours – watch out, it may be your country – and entirely new ones spring  to life,” Mr. Hoge promised the large audience from the UN community. And Mr. Khanna, Director of the Global Governance Initiative and Senior Research Fellow in the American Strategy Program at the New America Foundation, delivered  with a fast-paced illustrated narrative that ranged across the globe.

Mr. Khanna’s point is that the real borders that define the possibilities and problems of the future are those changing ones that track trade routes, migration patterns, and energy supplies, not those static ones that demarcate national frontiers. His presentation is drawn from the research he did in his wide travels to back up the thesis of his 2008 best-selling book The Second World: Empires and Influences in the New Global Order.

In the book, he argues that the emerging powers, what he calls “the second world,” are redefining global competition in the 21st century and that we are living in a time of apolarity where the traditional centers of gravity no longer hold. It’s a world in which economic power is more important than military power, and three distinct superpowers: China, the European Union, and the U.S., compete on a planet of shrinking resources.