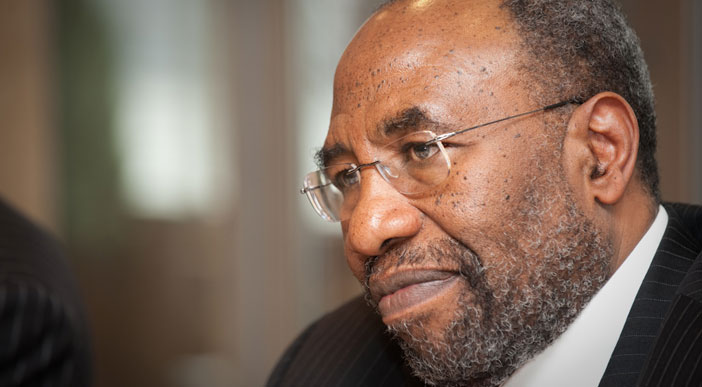 This was a statement made by Ruhakana Rugunda, the Permanent Representative of Uganda to the United Nations, at a lunchtime policy forum held December 7, 2009 to discuss the new IPI report “From Uganda to the Congo and Beyond: Pursuing the Lord’s Resistance Army.”

Ambassador Rugunda was a discussant at the event, which featured the author of the report, Dr. Ronald A. Atkinson, Director of African Studies at the University of South Carolina, and, as a second discussant, Dr. Suliman Baldo, Director of the Africa Program at the International Center for Transitional Justice. Chairing the event was Warren Hoge, IPI’s Vice President and Director of External Relations.

In his comments, Ambassador Rugunda posed the question, “Has the door to peace with the LRA been closed?” and then provided his own response.

“One is President Chissano, the Special Envoy of the UN Secretary-General,” the ambassador said. “The second is Riek Machar, the chairman of the talks, the chief mediator. Up to now, Kony has not called, but with the refusal of Joseph Kony to sign the final peace agreement, which all of us had even initialed, and President Museveni went to Juba to sign it, but it bounced because Kony refused — in my view, it would be inconceivable that any government worthy of its salt would fold its arms and say, ‘Aw, you know, Kony has refused to sign the final peace agreement, what can we do?’”

Read about the new IPI report, “From Uganda to the Congo and Beyond: Pursuing the Lord’s Resistance Army”