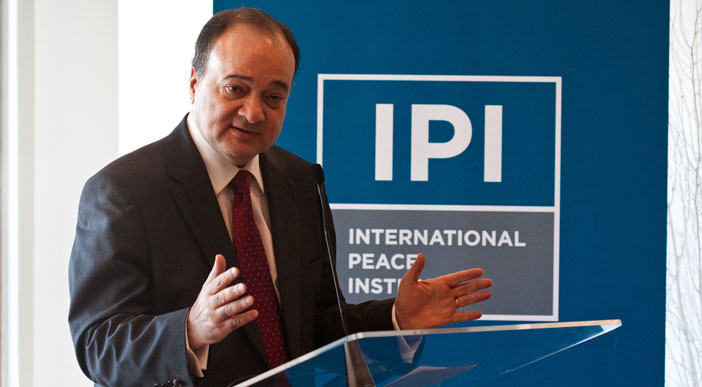 “Is the two-state solution still valid?” asked Nasser Al-Kidwa, the long-time Palestinian official, in a rhetorical question to a standing-room-only crowd at IPI. “I think the good news here, at least from my perspective, is that yes, it is still valid,” he said. “The bad news, nevertheless is that it will not be valid for a long time.”

He argued that not only is a two-state plan a valid way to settle the Israeli-Palestinian conflict, it is the only way. “There is no substitute solution, although smart guys on both sides believe that there is,” he said.

He listed suggestions for a cantonized “semi-entity, semi-state” on Palestinian land, Jordanian administration of Palestinian territory, and an economic buildup of the West Bank and abandonment of Gaza. “Now, all of these, I think, are a hoax,” he said. “This is a kind of thinking that will never succeed.”

Now the chairperson of the Yasser Arafat Foundation, and a member of the Central Council of the Palestinian Liberation Organization and of the Central Council of Fatah, Dr. Al-Kidwa is widely considered a possible candidate to succeed Mahmoud Abbas, who has announced that he will not run for reelection to the post of president of the Palestinian Authority.

Asked about this rumor, Dr. Al-Kidwa countered that there is little likelihood that there would be a vote anytime soon, given the ongoing objection of Hamas to holding elections. He added that, at the moment, there is no talk of succession.

“Now I know that it doesn’t sound that way to you, to all of you, to the Western mentality, but we are like that,” he said. “We are part of the Orient, and honestly, we don’t like to discuss things about succession and about who will do what. And it’s not only personally that we don’t like to do that, but we also, politically don’t like to do so.”

Dr. Al-Kidwa was introduced by IPI’s President, Terje Rød-Larsen, and the two men traded jocular reminiscences of times when they had had disagreements.

“Nasser, I can’t resist before I open the floor—you referred to skirmishes we had in the past, and I think I can reveal to all of you, yes, indeed we had a few skirmishes—not that many actually—but we always went out for dinner afterwards and discussed it and found out that we actually agree on those things.”

Dr. Al-Kidwa smiled at the comment. “Excellent wine,” he said.