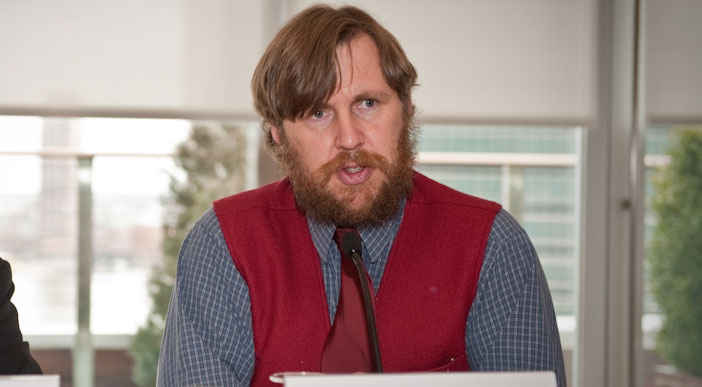 Afghanistan expert Michael Semple told an audience at IPI that one of the key pieces in formulating a path to reconciliation in Afghanistan is determining if there is “a critical mass inside the Taliban movement that does not aspire to have a monopoly over political power.”

“Many of the conversations which I heard certainly indicate that the thinkers inside the Taliban have realized that that is not attainable,” he said. “But it’s critical as to how big is the mass inside the movement.”

The policy forum, entitled “Afghanistan After the Surge: Taliban Reintegration and Reconciliation,” was held at IPI on March 4th. The goal of the forum was to examine the primary outcome of the January 28th London Conference on Afghanistan—the Taliban reconciliation strategy—in light of the recent US military surge.

The event was moderated by Warren Hoge, IPI’s Vice President for External Relations.

Both Semple and Exum stated that a military strategy alone would not resolve the conflict in Afghanistan. Any military strategy needs to be married with a political one, and both speakers argued that the current surge is compatible with long-term reconciliation.

Both speakers also argued that the US should be cautious about putting a deadline on troop withdrawals. The insurgency’s perception of the US commitment to Afghanistan—both in terms of its depth and longevity—is crucial because it affects the willingness of the insurgents to either continue fighting or to compromise. Setting a deadline could inspire Taliban insurgents to hold on until the announced departure date, expecting that they would have a greater chance of success on the battlefield in its aftermath.

Mr. Semple noted that the aspirations of many of the people in the Taliban movement “are not to somehow eliminate the United States, or demolish the Statue of Liberty.”

“Most of them feel that they were doing something which was inherently right for their country, but that they lost the kingdom on the basis of the link to al-Qaida, and some of them very discretely blame Mullah Omar for calling it wrong; both pre-2001 and at that critical point just after 9/11.

“Broadly labeled the ‘pragmatists,’ they’re the people you can deal with, and at the moment, they are the people who, if they were to come on board on a political deal, they could claim the brand name—the Taliban—they could use this as a moral and political authority of the Taliban to say, what we are doing now is good, and all good Muslims should cooperate with us.”

According to Semple, the recent arrests of key Taliban figures also pose a dilemma. On the one hand, these arrests are perceived as a means of bolstering security. On the other hand, many of the rank and file pragmatists believe that those who have been arrested had previously expressed interest in reaching some sort of accommodation with the Karzai government. In other words, according to this perspective, the arrests create disincentives among the rank and file pragmatists to enter into a deal because some of those who have been arrested are alleged to have made peace overtures to the Afghanistan government.

Semple questioned the ability of the officials entrusted with managing the reintegration process to do an effective job of implementing it. He also noted that spoilers in the government may highjack the reconciliation process, hoarding power for themselves and demonstrating unwillingness to compromise. Consequently, Semple espoused a stronger role for the UN and other international actors, who could use political and economic leverage to extract compliance among the various actors and provide required technical support for both reintegration and reconciliation.