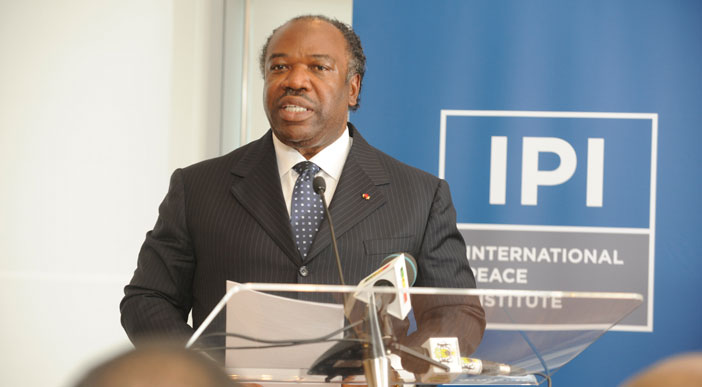 President Ali Bongo Ondimba marked Gabon’s presidency of the UN Security Council this month by addressing an overflow audience of diplomats at the International Peace Institute on March 8th.

He urged the international community to consider the importance of conflict prevention and early warning systems as a path towards world security.

“At this moment when the UN is devoting itself to rethinking a genuine culture of prevention, my ambition here is to propose a contribution to the strategy of conflict prevention,” said Mr. Bongo. “The time has come for us to pass from theory to practice.”

In response to a question, Mr. Bongo categorized the international system as “overwhelmingly reactive,” and said, “We must wake up and embrace prevention.”

Mr. Bongo said the Security Council should equip itself with an exemplary and more effective surveillance network. “We must create a single entity responsible for keeping watch and sounding a warning,” he said.

The President, in office since October, devoted the last quarter of his speech to the security risks that stem from climate change, for which he said, “the preventive approach would appear to be the only viable solution.” (read related news story)

“With risks closely linked to the spiral of conflict and the mass migrations that result, climate change contributes to the increase in poverty as well as to instability,” he said.

Gabon holds the rotating presidency of the UN Security Council during the month of March.

Read event transcript in French and English or with English translation

This version is in English:

This version is in French and English: