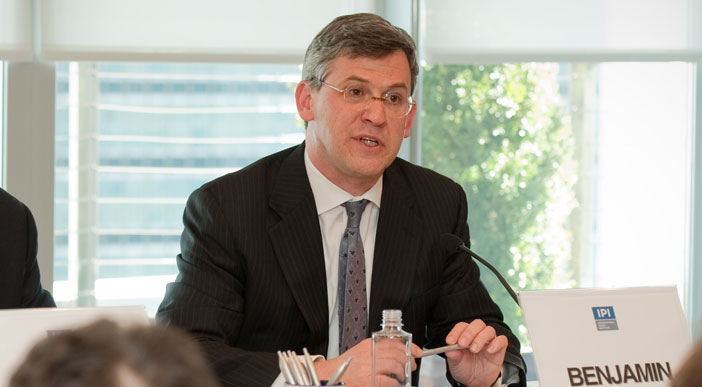 “International Counterterrorism Policy in the Obama Administration: Developing a Strategy for the Future” was the subject of a well-attended address at IPI on Monday, March 1st by Ambassador Daniel Benjamin, the Coordinator for Counterterrorism at the US Department of State.

Mr. Benjamin listed five elements he identified as “pillars of the new US approach” and then added, “Our approach recognizes finally that our counterterrorism efforts can best succeed when they make central respect for human rights and the rule of law.”

He asserted that “as President Obama has said from the outset, there should be no trade-off between our security and our values. Indeed, in light of what we know about radicalization, it is absolutely clear that navigating by our values is an essential part of a successful counterterrorism effort.”

In that connection, he acknowledged that the Administration had been unable to shut down the detention facility at Guantanamo by year’s end as promised but said the commitment to do so in the future remained firm. “We have found closing Guantanamo to be tougher than we expected,” he said, “but the President remains absolutely dedicated to that end.”

The five pillars he listed were:

1) building political will through consistent diplomatic engagement both bilaterally and multilaterally
2) promoting civilian law enforcement, the rule of law and good governance to address the state insufficiency that allows terrorists to operate freely
3) working with partners, including UN agencies, to help countries to confront the political, social and economic conditions that terrorists exploit to recruit
4) strengthening efforts to resolve longstanding political conflicts, with the Arab-Israeli clash “at the very top of this list”
5) identifying the drivers of radicalization and how to address them effectively. “We are asking ourselves time and again, ‘How do we take one terrorist off the street without creating ten more?’”

Click the “play” button on the right to listen to the podcast of this event: