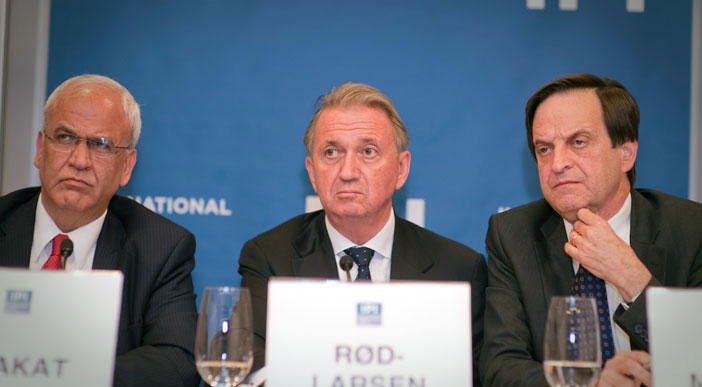 On June 25th, Palestinian Chief Negotiator Saeb Erakat and Israeli Deputy Prime Minister Dan Meridor debated the current Israeli-Palestinian peace process before a packed audience at IPI that included members of the press, UN ambassadors, and others guests from academia and the diplomatic community.

CNN reported the following about the event:

“Meridor said that the Israelis were committed to a two-state solution, but accused the Palestinian Authority of failing to make ‘tough choices’ and taking an ‘all or nothing’ approach. He also said that the Palestinians did not sense the urgency of the situation, and were holding out for a perfect solution.

“Erakat said the Palestinians were ready to come to the table as soon as Israel agrees to stop settlement expansion into the West Bank and restart negotiations initiated by former-Israeli Prime Minister Ehud Olmert.”

The two participants insisted the discussion did not constitute negotiations.

Get podcast of this event from iTunes