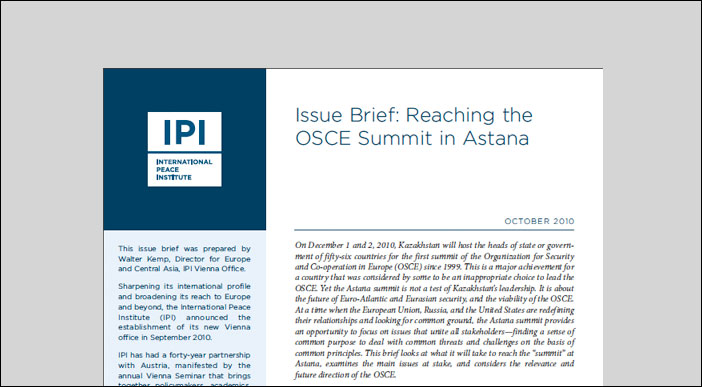 In December 2010, Kazakhstan will host fifty-six countries for the first summit of the Organization for Security and Co-operation in Europe (OSCE) since 1999. This issue brief looks at what it will take to “reach the summit” at Astana; examines the main issues at stake; and considers the relevance and future direction of the OSCE.

The Astana summit is a major achievement for a country that was considered by some to be an inappropriate choice to lead the OSCE. Yet the summit is not a test of Kazakhstan’s leadership. It is about the future of Euro-Atlantic and Eurasian security, and the viability of the OSCE. At a time when the European Union, Russia, and the United States are redefining their relationships and looking for common ground, the Astana summit provides an opportunity to focus on issues that unite all stakeholders—finding a sense of common purpose to deal with common threats and challenges on the basis of common principles.