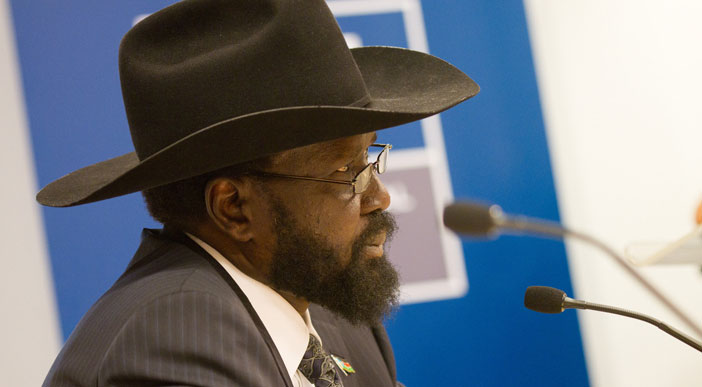 Delaying the referendum on independence in Southern Sudan would risk resumption of civil war, the head of the region’s government said, even as the U.S. suggested it will be hard to organize a credible vote on Jan. 9.

“We see this timing as sacred,” Salva Kiir, president of the government of southern Sudan and first vice president of Sudan, said yesterday at the International Peace Institute in New York. “There is a risk of a return to war in case of delay or denial of this exercise, and it would be on a very massive scale.”

[This event coverage was written by Bill Varner and reprinted from Bloomberg News. Coverage by Reuters follows below.]

Kiir said Southern Sudan was determined to negotiate agreements on oil, citizenship, borders and payment of $35 billion in national debts, but that the referendum has to go forward regardless of whether accords are reached before January.

“We have fought enough,” he said. “We have seen war is no good. We are genuinely willing to negotiate with our brothers in the North. It is in our interest that the North remains a viable state. But it is unfair to expect Southern Sudan to make all the compromises, that we should be expected to buy our freedom.”

The vote is a key component of a 2005 peace agreement that ended two decades of civil war between the Muslim north and the oil-producing south, which follows Christianity and traditional beliefs. About 2 million people died in the conflict and more than 4 million were displaced.

“There remains an enormous amount to be done and work must be accelerated to make up for lost time,” the U.S., Britain and Norway said in a joint statement on Sept. 21.

Kiir said the government of Southern Sudan needs more money to hire workers to conduct the balloting, United Nations and U.S. assistance to carry it off successfully, and helicopters to distribute voting materials throughout the region.

“I assure you my government has committed itself to conducting a free and fair vote in all areas,” Kiir said. “It is in our interests to see that the balloting goes smoothly.” The vote, and peaceful implementation of the outcome, will be the subject of a summit called by UN Secretary-General Ban Ki-moon tomorrow that President Barack Obama will attend. In advance of the meeting, Ban named a three-person panel to monitor preparations for the referendum, to be led by former Tanzanian President Benjamin Mkapa.

Obama decided to attend the meeting because “this could not be a more crucial time in the life of Sudan and also in the life of international affairs to ensure that the referendum goes off on time and peacefully,” Samantha Power, the administration’s senior director of multilateral affairs, told reporters on Sept. 20.

“This is an event that will show that the world is united and that the parties need to move very, very briskly and responsibly to ensure that these votes take place on time,” Power said.

The referendum was also the subject of a Sept. 21 meeting in New York of Secretary of State Hillary Clinton and Sudanese Vice President Ali Osman Taha.

“There was an agreement that there’s no time to waste; there’s a lot to be done,” State Department spokesman Philip J. Crowley said.

The U.S. threatened earlier this month to impose additional sanctions on Sudan if the government fails to make headway on a formal peace agreement with the South. Sudan, which is on the U.S. list of state sponsors of terrorism, has been subject to American economic sanctions since 1997.

by Reuters
(Reporting by Andrew Heavens in Khartoum and Helen Popper in New York; editing by Missy Ryan and Mohammad Zargham)

KHARTOUM/NEW YORK, Sept 22 (Reuters) – The leader of south Sudan pledged on Wednesday that northerners would be welcome if his region gains independence in an upcoming vote, brushing aside a warning minorities could face expulsion and abuse.

In just over 100 days, people across Sudan are due to vote in a long-awaited referendum that will decide whether the oil-producing south will secede. The vote is a key part of the 2005 peace deal that ended decades of north-south civil war.

An outcome for independence, widely expected by analysts, would leave a question mark hanging over the citizenship of hundreds of thousands of southerners living in Khartoum and other northern cities, and northerners living in south Sudan.

“Both southerners in the north and northerners living in southern Sudan told Human Rights Watch that they feared retaliation, even expulsion, if secession were approved,” the U.S.-based rights group Human Rights Watch said in a statement on Wednesday.

“The two parties to the peace agreement — the ruling National Congress Party (NCP) and the southern ruling Sudan People’s Liberation Movement (SPLM) — should state publicly that they will not expel each other’s minorities,” it added.

SPLM leader Salva Kiir, who is both president of the government of southern Sudan and the entire country’s first vice president, said on Wednesday that the south would respect minority rights if it gains independence.

“Those who want to remain in the south will have nothing to fear. They are most welcome,” he said during an event in New York organized by the International Peace Institute.

“There are people from the south in the north and vice versa. We need to protect these people with their property so no one infringes on their rights.”

Kiir said northern nomadic peoples who move to the south to graze their cattle in the dry season would not be impeded.

Sudanese President Omar Hassan al-Bashir, who heads the NCP, said in Khartoum on Wednesday that he backed a “free, fair and transparent” referendum.

Bashir, whom the International Criminal Court accuses of genocide in the separate conflict in Sudan’s Darfur region, said southerners should be able to vote “without any dictation, pressure and intimidation”.

As the Jan. 9 referendum date draws nears, foreign powers fear Sudan may not have time to pull together the highly sensitive and complex poll.

Southern leaders have repeatedly accused Khartoum of trying to disrupt the vote in a bid to retain control of the south’s oil. In turn, NCP officials have accused the SPLM of pushing a separatist agenda and quashing unionist voices in the south.

Northern and southern leaders have been meeting for weeks to decide how they will share oil revenues and national debts after the vote, together with other issues, including the nationality of southerners in the north and vice versa.

No concrete decisions have been announced, and it remains unclear how an independence vote — if it actually happens — would affect citizenship and property rights.

The United States has offered Khartoum economic and diplomatic incentives on the condition it allows the vote to take place, implements the 2005 peace deal and resolves outstanding issues in Darfur.

Speaking at the United Nations, U.S. President Barack Obama on Wednesday pledged support for a peaceful shift to democracy in Sudan as he declared a new U.S. approach to development.

Obama is among those scheduled to attend a special summit on Sudan during the U.N. General Assembly in New York on Friday that is expected to signal renewed global support for holding the vote on time.