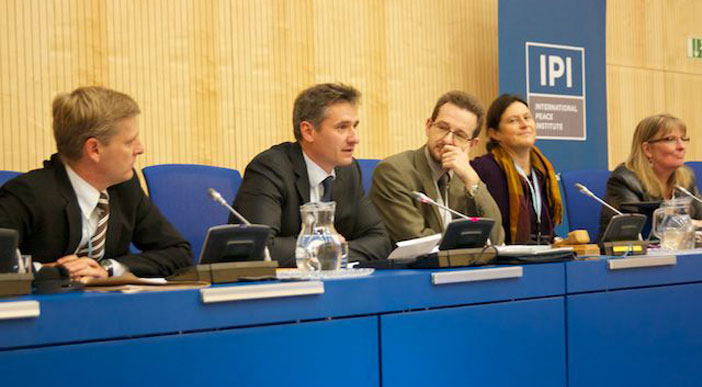 Organized crime is a threat to stability in almost every theatre where the United Nations is active in keeping or building the peace. It is also a threat to the achievement of the Millennium Development Goals (MDGs).

How well equipped is the UN to tackle this threat, and what can it do to reduce vulnerability to transnational organized crime?

This was the focus of a side event, co-hosted by IPI and Switzerland, on the margins of the Conference of Parties to the United Nations Convention against Transnational Organized Crime (TOC) that took place in Vienna on October 22, 2010.

In two recent Presidential Statements (S/PRST/2009/32 of December 8, 2009 and S/PRST/2010/4 of February 24, 2010), the Security Council has invited the Secretary General to mainstream the issue of fighting organized crime into conflict prevention strategies, conflict analysis, integrated missions’ assessments and planning and peacebuilding support.

The side event discussed what, concretely, is being done to follow up these calls, particularly in UN peace operations, the Department for Peacekeeping Operations (DPKO), the United Nations Office on Drugs and Crime (UNODC) and the Department for Political Affairs (DPA).

A good example is the “one UN” approach to fighting organized crime–particularly drug trafficking–in West Africa. Under the West Africa Coast Initiative (WACI), UNODC, DPKO, DPA and Interpol work together with ECOWAS and countries of the region to strengthen counter-narcotics and crime-prevention capacity.

Panelists discussed what more needs to be done within the UN system to fight transnational organized crime, including more effective use of threat assessments, more TOC experts in peace operations, criminal justice mandates for all affected peace operations, and more effective sharing of intelligence. Reference was made to the IPI Blue Paper on TOC which includes a number of specific recommendations.

While criminal justice support is increasing–for example, from DPKO and UNODC–the point was made that these efforts can be undercut by lack of political will. The point was raised, how do you deal with interlocutors who are actually part of the problem? The importance of a comprehensive approach to criminal justice reform was stressed, as well as taking a regional approach because of the transnational nature of the problem.

Justice is not one of the Millennium Development Goals, but its absence undermines them all. Countries affected by fragility, conflict and armed violence are furthest away from achieving the MDGs.

The importance of development to reduce vulnerability to crime and conflict was stressed, particularly by the Ambassador of Switzerland and the Geneva Declaration on Armed Violence and Development. The Declaration, thus far endorsed by 108 states, recognizes that armed violence is both a cause and consequence of underdevelopment and constitutes a major obstacle to the achievement of the MDGs. It promotes a comprehensive response to deal with this challenge.

The meeting was attended by around 60 people, and included a lively discussion from the floor.