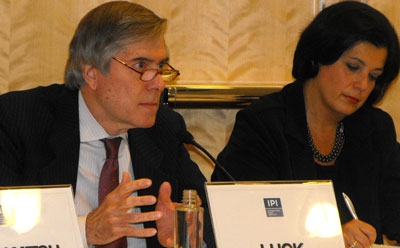 Dr. Edward C. Luck (left), IPI Senior Vice President for Research and Programs, and Donna-Marie Maxfield, Chief of Staff of the Office of the Under-Secretary-General

On October 19, 2010, IPI hosted a roundtable discussion together with representatives from troop- and police-contributing countries on the implementation of Security Council Resolution 1325 in peacekeeping and other peace processes.

The resolution reaffirms the important roles of women in the prevention and resolution of conflicts, peace negotiations, peacebuilding, peacekeeping, humanitarian response, and postconflict reconstruction.

Further, it stresses the importance of their equal participation and full involvement in all efforts for the maintenance and promotion of peace and security.

The IPI roundtable, which took place during the month of the tenth anniversary of the adoption of Resolution 1325, provided an opportunity to review progress on the implementation of the resolution, and to discuss a forward-looking strategy for the next decade.

The roundtable was hosted in partnership with the UN Departments of Peacekeeping Operations (DPKO) and Field Support (DFS). Presentations were made by Dr. Izumi Nakamitsu, Director of the Policy Evaluation and Training Division at DPKO; Commissioner Ann-Marie Orler, UN Police Adviser; Maj. Gen. Abhijit Guha, Deputy UN Military Adviser; Donna-Marie Maxfield, Chief of Staff of the Office of the Under-Secretary-General; as well as member-state representatives from troop- and police-contributing countries.

Participants shared key experiences and lessons learned both from the field and at the national level in implementing Resolution 1325, and on how to revitalize efforts to strengthen the role and participation of women in peace processes and conflict resolution. It was emphasized that there has been great progress in the development of policy, guidance, and training tools in this area over the past ten years, but that the next decade must focus on translating these policies and tools into the peacekeeping reality on the ground.

The discussion was convened under the Chatham House Rule of nonattribution.