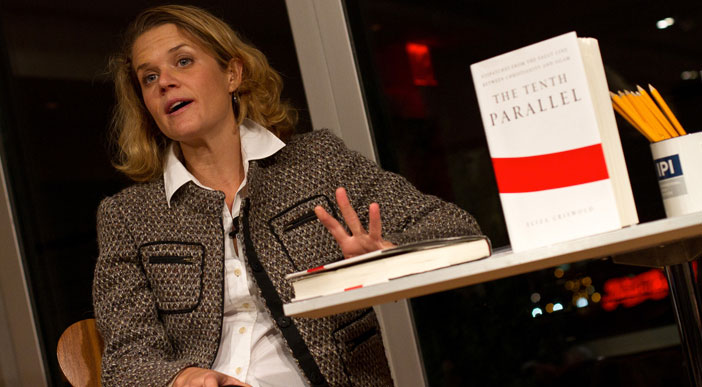 “The most important and overlooked religious struggles of our time are those inside of religions, not between them,” said Eliza Griswold, author of The Tenth Parallel, Dispatches From the Fault Line Between Christianity and Islam, during an IPI event on October 14th.“They’re the struggles between liberals and conservatives over who is a true believer and who’s not. They’re the struggles inside Islam between different sectarian beliefs of Sunni, Shia, Sufi, as well as questions between liberals and conservatives over what contemporary transpositions, what it means to be a Muslim in the twenty-first century and how one lives that faith.”

Ms. Griswold, a journalist and poet who is the daughter of Frank Griswold, former Presiding Bishop of the Episcopal Church, shared her personal stories of meeting heads of state and terrorists while traveling over a seven-year period along the tenth parallel, where Christian and Muslim communities often live side-by-side. Her journey took her to Nigeria, Somalia, Sudan, Ethiopia, Indonesia, Malaysia, and the Philippines.

“As I traveled, I was looking less for conclusions than for simple realities,” Ms. Griswold said of her explorations. “I realized very early on that I was not interested, nor was I capable of, explaining away anyone’s belief, or just putting a context on who was who. So what I decided to do is try to bring those stories back whole cloth, and let believers on both sides of this divide, people who had perpetrated great acts of violence in the name of their religion, people who had given their lives to build peace around their religion… to spend time telling their stories as they told them to me.”

To listen to the podcast, click the “play” button: