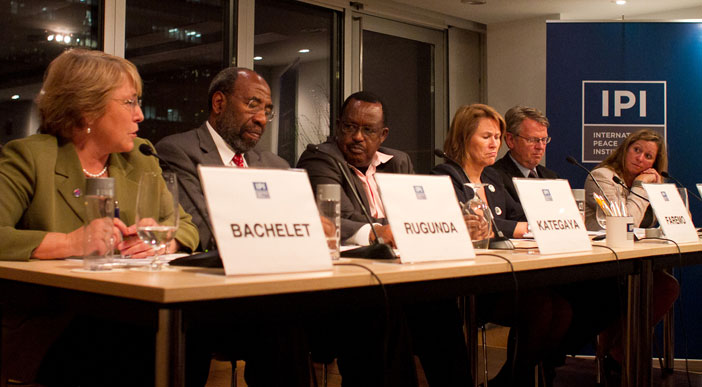 The implementation of Security Council Resolution 1325 in UN peacekeeping has generated some positive results to date, though the record remains mixed. On October 25th, a panel discussion held at IPI commemorated the 10th anniversary of Resolution 1325, which mandated peacekeeping missions to support the participation of women in peace processes and to integrate a gender perspective in UN peacekeeping operations.
Panelists at the event, which was held on the eve of the Security Council debate on Resolution 1325, included Eriya Kategaya, Deputy Prime Minister and Minister for East African Affairs of Uganda; Grete Faremo, Minister of Defense, Norway; Michelle Bachelet, Executive Director and Under-Secretary-General for UN Women; and Abigail Disney, Executive Producer of the forthcoming documentary “Women, War and Peace.”

The event was co-chaired by Ambassador Ruhakana Ruganda of Uganda and Ambassador Morten Wetland of Norway.