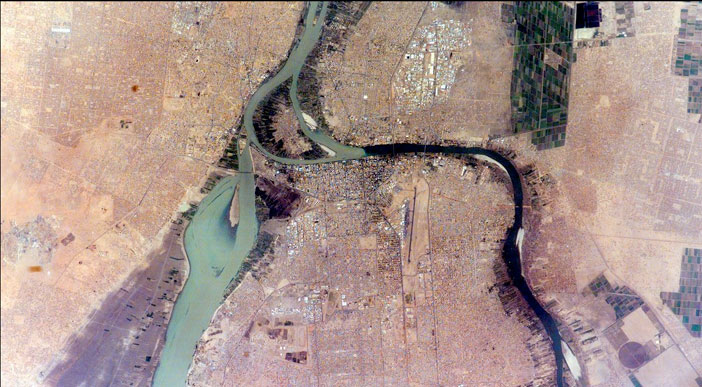 An aerial photo of Khartoum, Sudan, where the Blue Nile (right) and the White Nile meet. Photo credit: NASA

The contemporary challenge facing the Nile basin countries is that of how to establish a legal framework for the utilization of its waters that is acceptable to all.

This issue brief provides a sketch of the major issues under discussion and summarizes the current state of the negotiations over the Cooperative Framework Agreement (CFA).

Negotiations for a CFA started in 1997 and have not yet been concluded. The CFA seeks to establish a permanent Nile River Basin Commission through which member countries would act together to manage and develop the resources of the river. The countries constituting the Nile Basin Initiative (NBI) are Burundi, Democratic Republic of the Congo (DRC), Egypt, Ethiopia, Kenya, Rwanda, Sudan, Tanzania, and Uganda.

There has been noticeable tension among the NBI countries due to disagreements over what constitutes the equitable utilization of water. Potential conflicts over the waters of the Nile River stem from the increased need for water for irrigation, as well as from the rise in the hydropower needs of the riparian countries.