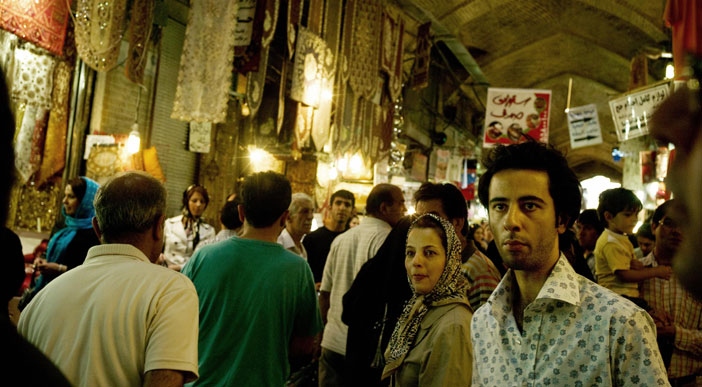 Read the questions asked in the poll

Iranians want nuclear weapons and reject proposed international deals to restrict the production of enriched uranium, but they are anxious about the international sanctions and isolation their country faces, a new poll has found.

The polls were made public today at the International Peace Institute by the pollster, Craig Charney, President of Charney Research and IPI Senior Adviser.

Seven in ten Iranians favor their country developing and possessing nuclear weapons. Support for nuclear arms has risen almost twenty points in the past eighteen months, as the international confrontation over Iran’s nuclear program has deepened. Nuclear development is favored by both pro- and anti-government Iranians.

The Iranian public also opposes two proposed international agreements to halt or slow Iran’s nuclear program. The so-called “Grand Bargain”—Western security guarantees and trade normalization in return for an end to uranium enrichment, nuclear inspections, and concessions on Afghanistan, Iraq, and Palestine by Iran—is opposed by 55 percent to 27 percent. The recent Turkish-Brazilian deal, intended to slow the program and offer more time for talks by shipping half of Iran’s enriched uranium abroad, was opposed by 39 percent to 34 percent, with one in four Iranians unsure.

Iranians are divided on the impact of economic sanctions imposed in response to the nuclear program, with roughly half thinking they have had an impact. Far fewer—just one in six—think there is any likelihood America or Israel will attack their nuclear facilities.

“Support for a deal is stronger among Iranians who think sanctions are hurting or that there is a chance of a US or Israeli attack,” said Dr. Charney. “But not enough believe that to produce a majority for either deal.”

However, Iranians are concerned about the pressures on their country due to its nuclear program: 53 percent cite sanctions, isolation, or Iran’s image as its chief foreign-policy problem. The economy worries them too: three-fourths complain of shrinking or stagnant incomes.

While Iran’s leaders are widely believed to be seeking regional hegemony, its public would prefer to focus on domestic needs by a margin of two to one. Moreover, while three-fifths support aid to the anti-Israel Palestinian Hamas and Lebanese Hezbollah Islamic resistance movements, three-fifths would also accept a two-state agreement between Israelis and Palestinians.

The poll found that, by a massive three-to-one majority, Iranians want closer ties to the West, not reduced links. They also support Western criticism of Iranian human rights violations and aid to Iranian nongovernmental organizations.

Despite their desire for closer ties, however, as tensions have risen on the nuclear issue, Iranians have felt spurned by the West. Almost nine-tenths are now hostile to America—a 40-point increase on 2008—while 55 percent are unfavorable to Europeans.

“Iranians want closer ties to the West and their nuclear program too. They haven’t understood yet that they can’t have both,” says Dr. Charney.

The leaders of Iran’s opposition Green Movement are favored by roughly one-third of Iranians, the poll found, similar to their results in the 2009 Iranian presidential election. Although there were widespread charges of fraud, all the post-election polls show that around 60% of the people who were interviewed say that they voted for Ahmadinejad in 2009, close to the official and much-disputed figures.

Majorities of Iranians supported the postelection crackdown on opposition and continue to support the theological foundations of their regime, the poll found. However, half are critical of the Ahmadinejad government’s performance and expect further democratization of their government in the next decade.

The poll was conducted in early September by telephone in Farsi, from a phone bank in Istanbul, among a representative national sample of Iranians. (More than 85 percent of Iranians have telephones.) The margin of sampling error was 3.7 percent.

New polls in three key Middle Eastern countries show that the Lebanese are critical of Hezbollah’s attacks on the Hariri tribunal but also disillusioned with their own government, while revealing surprising optimism among Palestinians and a pensive Israel.

The polls were made public today at the International Peace Institute in New York by the pollster, Craig Charney, President of Charney Research and IPI Senior Adviser.

Three-fifths of Lebanese support the special tribunal investigating the 2005 murder of ex-Prime Minister Rafiq Hariri, the survey found, despite virulent criticism from the opposition Hezbollah movement toward the court, expected to accuse Hezbollah members of the crime. By a 50 percent to 37 percent margin, the Lebanese also felt the actions of Hezbollah’s armed militia risk provoking another war with Israel, as happened in 2006, rather than deterring one.

However, the poll found most Lebanese pessimistic about the state of their country, with substantial majorities dissatisfied with economic and security conditions and the performance of Prime Minister Saad Hariri, the slain leader’s son. It also indicated that Hariri’s government, elected last year, would likely lose if new elections were held.

“In Lebanese eyes, the poll shows, Hezbollah has overreached again with its attacks on the tribunal, as it did in triggering the 2006 war,” says Dr. Charney. “But the Lebanese are even more unhappy with their government, and Saad Hariri must seek a way to turn that around.”

In contrast, the share of residents of the Palestinian Territories who are optimistic about trends there, 47 percent, has doubled since a 2009 IPI poll and outnumbered the pessimists for the first time in any poll of Palestinians. The gains were heavily concentrated in the West Bank, where big improvements in the economy and personal security were reported by the poll.

These results yielded political gains for Palestinian Authority president Mahmoud Abbas and Prime Minister Salaam Fayyad, who were both viewed favorably by two-thirds in the poll. (Their scores were similar in the West Bank and the Gaza Strip, ruled by the Islamist Hamas movement since a 2007 coup.) The poll also found that Abbas’ Fatah movement remains the most popular party among Palestinians, with 35 percent of voting intentions, while Fayyad’s smaller Third Way almost tripled its support in the past year to reach 8 percent.

In Israel, the poll found a paradox: though the majority described both economic and security conditions as good, more than half also said the country was headed in the wrong direction.

“We discovered the reason when we did focus groups in Israel,” Dr. Charney said. “There is a sense that this situation can’t last, that it’s ‘only temporary,’ as one of our Jerusalem group members put it.”

Although the poll found that only two-fifths of Israelis approved of Prime Minister Benjamin Netanyahu’s job performance, it also showed that his right-wing coalition would easily win new elections with an increased majority. His share of voting intentions has jumped since the Gaza Flotilla incident in late May, in which Israel’s seizure of the ships left nine dead and sparked international condemnation but improved Netanyahu’s standing at home.

The poll also found that the Israeli and Palestinian publics both support the notion of a Palestinian state alongside Israel in principle. However, their views differ sharply on the Arab Peace Initiative, the Arab League-endorsed peace plan: Palestinians back it, Israelis do not.

Lebanese polled remained open to a truce with Israel, but by a smaller margin than in a 2008 IPI poll: 52 percent were in favor, against 80 percent in the prior survey.

Despite the desire for peace, mistrust remains pervasive. Three-fourths of Israelis don’t think Abbas’s Palestinian government can make peace and only 10 percent trust him. Large majorities of Palestinians (62 percent) and Lebanese (72 percent) don’t consider Netanyahu capable of making peace; only 2 percent of the Palestinians and none of the Lebanese polled trust him.

The polls all had random national samples of 1,000 respondents and interviews were conducted by leading local polling firms. The margin of error for each was 3 percent. The Palestinian poll was taken face-to-face from August 16th to 22nd and the Lebanese poll in person from August 16th to 20th. The Israeli poll was done by telephone from August 30th to September 2nd.

Video shows poll results as slides. Each slide appears for about twenty seconds.