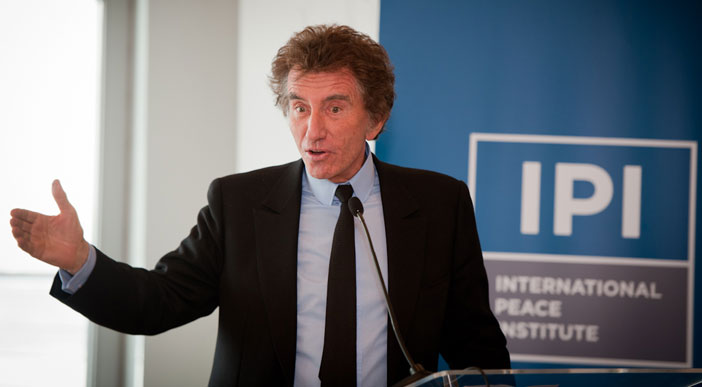 Jack Lang, Special Adviser to the Secretary-General on Legal Issues Related to Piracy off the Coast of Somalia, said at an IPI event on January 25, 2011, “We have to attack piracy at the head.”

Mr. Lang referred several times to piracy “masterminds,” and asserted, “Each time that we know a mastermind, we have to apply sanctions, individual sanctions.”

“We have to make an effort with the support of the international community, and, in particular, UNODC [UN Office on Drugs and Crime], to have a rule of law,” he said.

“Too few countries accept to prosecute and judge pirates,” he said.

Mr. Lang said that the international community must support the training of Somali judges and he proposed creating three tribunals specialized on piracy: one in Puntland, another one in Somaliland, and an extraterritorial Somali tribunal which could be located in Arusha, Tanzania.

Speaking both in his native French and in English, Mr. Lang cited this “repression” of piracy as one part of a two-part solution, with the other part being prevention. He said, “Firstly it is necessary to encourage, to support economic development” in Puntland and Somaliland, two hubs of piracy, and offer “young Somali people other possibilities, other futures.”

Mr. Lang said the total cost of piracy is above $5 billion, while the UNODC estimated the cost of expanding prison capabilities and training judges to be $25 million for three years.

“The main question is, who will pay?” he said.

“Fifteen hundred people make the law in the Indian Ocean,” he said, referring to the estimated number of pirates, “in front of naval forces from the most powerful countries, the United Nations, the European Union, the African Union , the whole international community. That’s a real challenge.”

To listen to the podcast, click the “play” button: