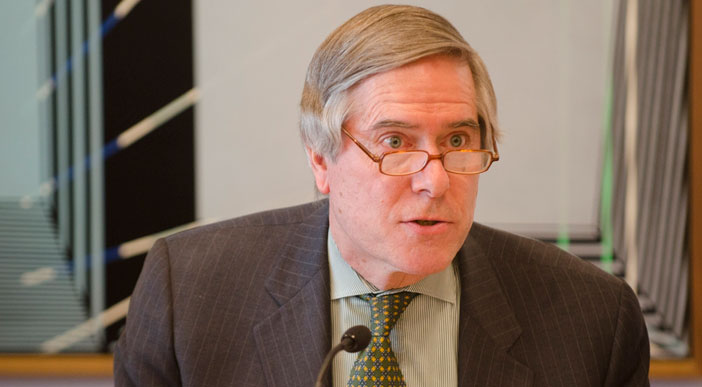 Edward C. Luck, IPI’s Vice President for Research and Programs and a Special Adviser to the United Nations Secretary-General, discussed the military intervention in Libya and how it represented an invocation of the Responsibility to Protect principle in an interview with Andreas Ross, the Political Editor of the Frankfurter Allgemeine Zeitung.

The interview, headlined “We Don’t Want to Wait Until the Dead Bodies Pile Up,” was published in German on March 24, 2011. A translation of the interview is below:

Mr. Luck, is the military intervention in Libya about the world implementing the Responsibility to Protect?
Yes. Both Libyan resolutions of the United Nations Security Council refer to it. This is the first time that the Council has employed the enforcement provisions of Chapter VII of the UN Charter to implement the Responsibility to Protect. That is historic! Now the Member States, of course, have to strictly abide by resolution 1973.

Isn’t the Coalition really pursuing regime change?
I don’t see any indication of this. Some participating states may have other goals. But I am under the impression that everybody recognizes that the UN mandate only authorizes measures to protect the population. It is important that no one forgets the purpose of the exercise.

Do you worry about delegitimizing the concept of RtoP, which is very unpopular among opponents of humanitarian interventions anyway, if other goals are pursued in its name?
We always have to beware of possible abuse. The Secretary-General will regularly report to the Security Council about the steps the Coalition is taking. Generally, it is important for the acceptance of RtoP that we only invoke it when a population is in danger of genocide, war crimes, ethnic cleansing, or crimes against humanity.

Which scenario was impending in Libya?
There seemed to be crimes against humanity, that is, widespread and systematic attacks on the population with the knowledge of the authorities. The air attacks on peaceful protesters were outrageous. Nevertheless, the Security Council tried sanctions first – but the Qaddafi regime kept advancing. Finally, there was good reason to believe that a bloodbath in Benghazi was imminent.

Could the UN verify the reports of widespread air attacks on peaceful protesters?
There are videos that suggest that such attacks have taken place. But the concept of RtoP rests on prevention: We don’t want to wait until dead bodies pile up and we can clinically prove exactly what happened, instead we seek to intervene soon enough to prevent mass violence. Colonel Qaddafi called the protesters “cockroaches.” That is what the perpetrators of the genocide in Rwanda called the Tutsis before they massacred them.

Unlike in Tunisia and Egypt, the Libyan protest movement has quickly become an armed resistance. Is RtoP in danger of becoming a pretense for supporting a party in a civil war?
The resolutions of the UN Security Council clearly state that the arms embargo and the call for a truce apply to both sides of the conflict. But Qaddafi’s opponents are simple civilians who have taken up arms for self-defense: housewives, students, lawyers, doctors, teachers or technicians. It was not an armed rebellion.

According to the UN resolution, would Coalition troops have to stop the opponents of the regime if they used the conquered tanks and weapons to make up territory?
Of course the Coalition would not allow the opposition to direct military violence against the civilian population. Perhaps someday we will reach a point at which the opposition has to be reminded that the Security Council did not give them a green light to advance. There is the expectation that Qaddafi’s troops will pull back from some of the embattled cities and territory. The air forces of the Coalition are not intended, however, to support the military efforts of the opposition. To protect civilians, both sides need to be separated from one another.

An East-West split of the Country must be tolerated for the time being?
Even in the West of Libya there are cities in which resistance against Qaddafi has formed. The resolution reaffirms Libya’s territorial integrity.

Ought the Security Council call on the opposition to lay down their arms?
I don’t know. But you have to understand that the UN is seeking a political solution. The military intervention is not supposed to last long. In the long-term, the sanctions aim to compel Qaddafi to take a different direction. His previous path was a path of destruction – not only of his people, but also of his legitimacy. Every government has a responsibility to protect its population; all UN Member States, including Libya, have committed to this. We want to help states meet their responsibility.

Wouldn’t this help in the Libyan case have to ultimately result in removing Qaddafi from power?
That may be the case, but that is not what the Security Council decided. Of course there is reason for being skeptical about whether Qaddafi is prepared even to respect human rights, including the right to life.

Are you hoping that the UN Security Council will also provide mandates to implement the responsibility to protect in other cases now?
The UN Secretary-General frequently refers to RtoP, such as in Kyrgyzstan and Guinea last year. Often coercive measures are not necessary after a warning that the world is watching. But there are of course cases, such as Cote d’Ivoire, in which the message does not seem to get through and new measures could be considered. Maybe our intervention against Qaddafi can serve as a warning to other regimes.

So you are not frustrated that Western states are only referring to RtoP in this case where tangible interests such as oil and refugees are concerned?
If states cared only about economic relations with Qaddafi, they would have looked the other way. To think that Western countries are merely waiting for pretenses to intervene militarily in other states is nonsense. More frequently, powerful states ignore the cries for help from people under duress. Somalia, Darfur, and the Congo are examples of this.

Exactly: The states are referring to a universal principle, but their intervention depends on other factors.
We have to deal with the world the way it is. In the Libya crisis, there was first a clear call from the Arab and African regions to do something. Second, the government advanced militarily against its own people. In Eastern Congo, where mass rape occurs, or in Somalia, it is much more complicated. There you would have to intervene with ground troops. In Libya, it is about a rare case where a militarily far superior government is exercising violence against its own population. The situation is clear–which does not mean that the solution of the conflict will be easy.

Related Links:
Read essays on RtoP as published in the most recent Favorita Paper