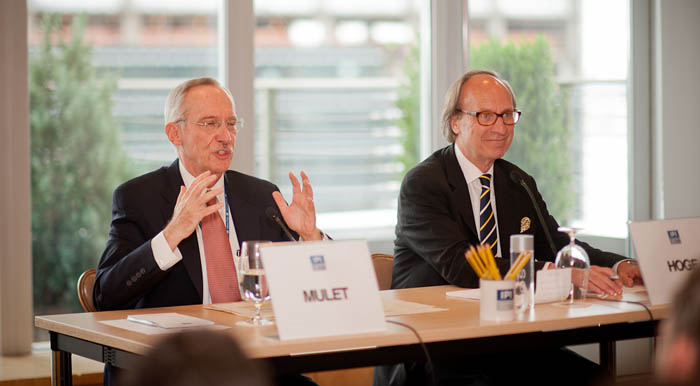 In an appearance at IPI, Assistant Secretary-General for Peacekeeping Operations Edmond Mulet described in harrowing detail the conditions he found in Haiti in the immediate aftermath of the earthquake in January, 2010 and how overwhelmed the country was in trying to survive the devastation.

Mr. Mulet was arriving there four days after the quake to take up a post on an emergency basis that he had held before–Special Representative of the Secretary-General to Haiti–leading anew a UN operation that had just lost 102 people, including its head, Hédi Annabi, and deputy head, Luiz Carlos da Costa.

He was to occupy the post for the next 16 months before returning this June to his Assistant Secretary-General job, and he came to IPI on June 29 to describe the experience and the challenges the UN faced in Haiti. Over those months he said he found himself thinking, “It was very lucky that we had a peacekeeping mission in Haiti when this happened because we were able to assist and respond in a better way to the needs of the Haitian population.”

“What is a peacekeeping mission doing in Haiti?” he asked. “Why do we have 12,000 soldiers and police in Haiti?”

Responding to the question, he said, “I think it’s because the Security Council doesn’t have another tool to face a situation where you have a completely failed state. We are the backbone of the country creating the space for other actors on the development side, the economic side also to advance and do their job.”

The international community, however, could “feel very proud of the work we did there during these last months after the earthquake, trying to get back to the levels of stability, development that we had been about to achieve under Hédi Annabi, just before the earthquake when we could see the light at the end of the tunnel.”

In conclusion, he said, “I hope that this will be just an intermission and a way forward.”