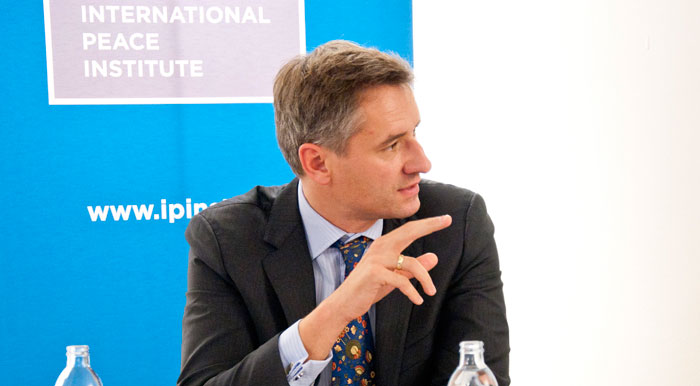 On October 25th, IPI’s Vienna office hosted a discussion on how the changes in the Arab world affect the OSCE-Mediterranean partnership, and whether the time is ripe to intensify a dialogue on strengthening security and cooperation in North Africa and the Middle East.

The Organization for Security and Cooperation in Europe (OSCE) has had a Mediterranean dimension to its work since its establishment in 1975. The organization’s founding document, the Helsinki Final Act, says that “security in Europe is to be considered in the broader context of world security and is closely linked with security in the Mediterranean area as a whole, and that, accordingly, the process of improving security should not be confined to Europe, but should extend to other parts of the world, and in particular to the Mediterranean area.”

In addition to its 56 participating states, the OSCE has six Mediterranean Partners for Cooperation: Algeria, Egypt, Israel, Jordan, Morocco and Tunisia. There is regular dialogue among these states in the framework of the OSCE, as well as limited practical cooperation.

The meeting was attended by a select group of representatives from OSCE-participating states, Mediterranean Partners for Cooperation, the OSCE Secretariat, the Office for Democratic Institutions and Human Rights, and the OSCE Parliamentary Assembly.

The four keynote speakers were: Monika Wohlfeld, Holder of the German Chair in Peace and Conflict Prevention and Lecturer in Security Studies at the University of Malta; Ambassador Eoin O’Leary, Head of the Permanent Mission of Ireland to the OSCE and Chair of the Contact Group for the Mediterranean Partners for Cooperation; Karin Kneissl, Middle East expert, freelance journalist and researcher; and Abdullah Alsaidi, the former ambassador of Yemen to the United Nations, who is an IPI Senior Fellow in New York.

The workshop looked at how the OSCE-Mediterranean partnership can be strengthened as a result of the dramatic changes sweeping through the Arab world. Participants recalled past attempts to enhance partnerships across the Mediterranean, and focused on what steps have been taken this year; for example, election monitoring in Tunisia.

It was noted that the OSCE’s room for maneuvers is limited by caveats on “out of area” operations. It was also stressed that assistance should be needs-driven, based on specific requests, and take into account the political specificities of each country.

Many participants underlined that the OSCE had to find its specific “niche” in providing assistance to its Mediterranean Partner states, given the plethora of international organizations already active in the region.

The implications of the revolutions for the region as well as for the OSCE area were also discussed.

The question was raised as to whether the time is now ripe to promote a conference on security and cooperation in the Mediterranean. Past attempts were recalled, as were other initiatives like the Barcelona Process and the Union for the Mediterranean.

It was stressed that any initiative for regional security and cooperation would have to take into account the Arab-Israeli peace process, and vice versa. Some speakers felt that regional cooperation could only progress if there is a breakthrough in the Arab-Israeli peace process, whereas others felt that a regional framework for dialogue could create an environment more conducive to peace and good-neighborly relations. The Helsinki process of the 1970s was raised as an historical precedent, although it was noted that the circumstances were significantly different during the Cold War more than three decades ago.

The OSCE-Mediterranean dialogue will be high on the agenda of the OSCE Ministerial Council meeting which will take place in Vilnius, Lithuania on December 6-7th.