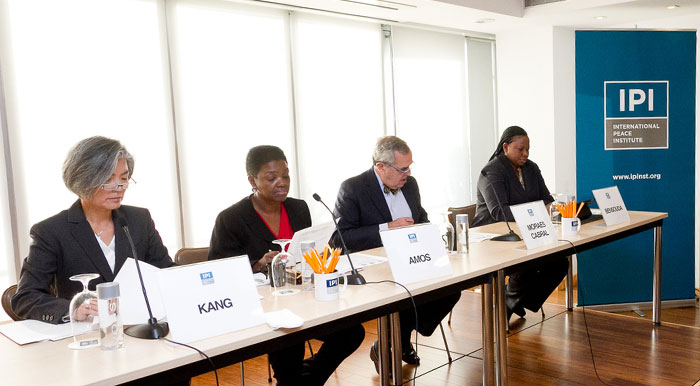 On November 1st, IPI hosted a one-day workshop, co-organized with the Permanent Mission of Portugal to the United Nations and the UN Office for the Coordination of Humanitarian Affairs (OCHA), to review the UN Security Council’s efforts at enhancing accountability for better protection of civilians in armed conflict.

Entitled “Accountability and Fact-Finding Mechanisms for Violations of International Humanitarian Law and Human Rights Law: The Role of the Security Council–Past and Future,” this event was organized on the day Portugal assumed the Presidency of the Security Council for the month of November and ahead of the November 9th open debate on the protection of civilians in armed conflicts.

Ensuring accountability for violations of international humanitarian law and human rights law—both for individual perpetrators and for parties to conflict—is one of the five core challenges to achieving more effective protection for civilians in armed conflict, as identified by Secretary-General Ban Ki-moon in his 2009 and 2010 reports on the issue. As Mr. Ban noted, “In many conflicts, it is to a large degree the absence of accountability and, worse still, the lack in many instances of any expectation thereof, that allows violations to thrive.”

This timely meeting brought approximately 80 participants together, drawn from member states, the UN, NGOs, and the broader policy community, to discuss the role of the Security Council in promoting accountability for violations of international humanitarian law and human rights law.

The event opened with statements by Ambassador José Filipe Moraes Cabral, Permanent Representative of Portugal to the UN; Valerie Amos, Under-Secretary-General for Humanitarian Affairs and Emergency Relief Coordinator; Kyung-wha Kang, Deputy High Commissioner for Human Rights; and Fatou Bensouda, Deputy Prosecutor of the International Criminal Court. It also featured remarks by a number of experienced panelists, all practitioners and experts in their field.

The discussions, which separately tackled the three broad themes of individual criminal responsibility, fact-finding mechanisms, and reparations, systematically explored past initiatives of the Security Council and other existing mechanisms in order to identify lessons learned, best practices, and challenges. It provided a forum for participants to reflect upon and propose additional steps the Security Council might take to ensure accountability for violations in armed conflicts.