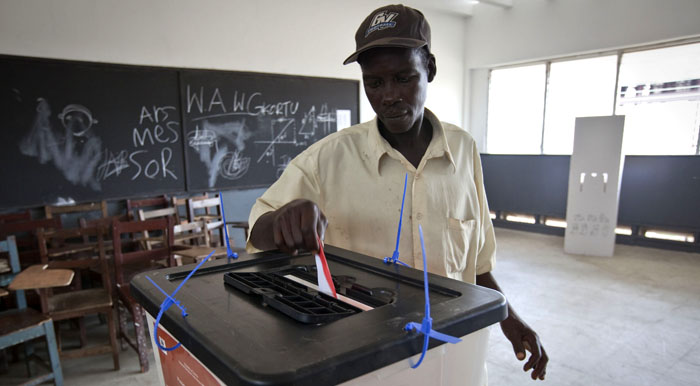 A voter in Monrovia, Liberia, 2011 Photo by UN Photo/Staton Winter

This meeting note summarizes the discussions at a conference organized by the United Nations Office for West Africa (UNOWA) in Praia, Cape Verde on May 18-20, 2011. The conference addressed the need for a sustained effort to strengthen electoral processes in West Africa as a means to consolidate peace and democracy in the region.

Many West African countries face numerous challenges in organizing free, fair, and peaceful elections, and the conference discussed the existing regional and national frameworks that support democracy and electoral processes in the subregion. Best practices and lessons learned from recent electoral processes in Cape Verde, Ghana, and Niger were shared, with a view to informing the organization of upcoming elections in neighboring countries. The role and modalities of electoral assistance were also discussed, supported by concrete cases of UNDP’s electoral initiatives in Niger and Guinea.

The conference further underlined the importance of collaborative initiatives in strengthening democratic processes and preventing conflict. Finally, key standards, processes, and actors that can help to build democracy and stability were discussed: human rights and gender-equality norms, electoral litigation, and the role of security forces and the media during electoral processes all present opportunities to reduce election-related violence and improve election outcomes in West Africa.

The note also reprints the full text of the “Praia Declaration on Elections and Stability in West Africa,” which was adopted at the close of the conference.