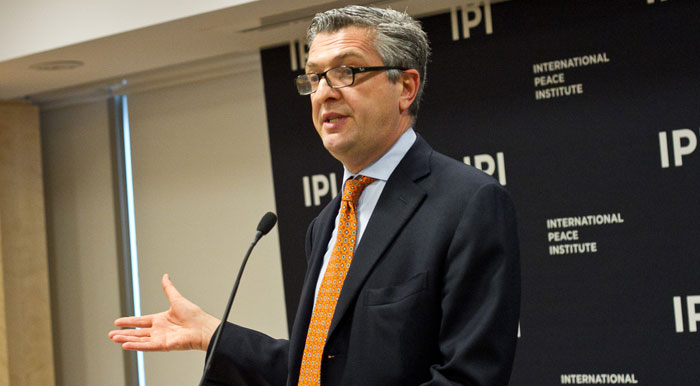 Filippo Grandi, the Commissioner-General of the United Nations Relief and Works Agency for Palestine Refugees (UNRWA), told an IPI audience that the question of accommodating the wishes of the Palestinian refugees was “suffering a particular stagnation,” leaving them profoundly frustrated at their continuing  plight six decades after the partition of the land they once inhabited.

“The refugee question tends to be pushed towards the end of the discussion,” Mr. Grandi said of the talks over the ongoing impasse with Israel. “This adds to the frustration of people who have been waiting for a solution to their problem for so long.”

Mr. Grandi’s agency is charged with bringing education, health, relief, and social services to as many as five million Palestinian refugees in Gaza, the West Bank, Jordan, Lebanon, and Syria.

Mr. Grandi spoke on November 4th as part of IPI’s SRSG (Special Representative of the Secretary-General) series that affords leading UN representatives in the field a chance to communicate their on-the-ground experience directly to members of the UN and foreign policy community in New York.

He also spoke as the UN community was focusing on the evolving debate over a possible move by Palestinian authorities to achieve statehood at the UN, through a vote of the Security Council or General Assembly.  Mr. Grandi said that “the statehood question, in and of itself, does not address the refugee question.”

He said that he shared the Secretary-General’s view “that the aspirations of the Palestinians to have a state is legitimate,” but added that it was not for him to judge how they achieved that aspiration.  He said that the matter “has to be solved through negotiations, through the political domain” and must involve the Palestinian refugees themselves.

“Any solution that does not involve direct consultations with refugees themselves in some way, whatever solution is arrived at without this sense of involvement will not be durable,” he said.

The meeting was chaired by Warren Hoge, IPI’s Senior Adviser for External Relations.