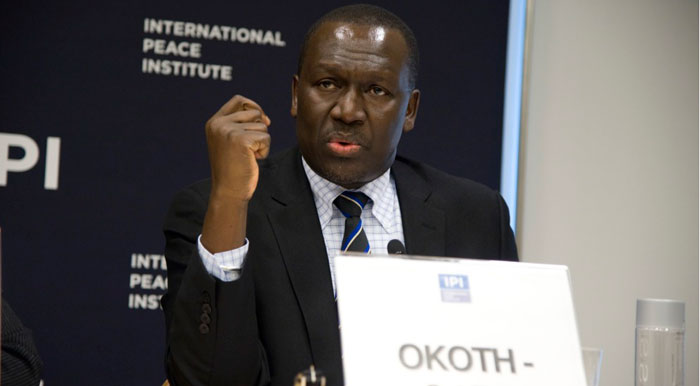 “If you look at comparable groups, one being an external displacement, and the other having remained at home, really their situation is incomparable,” he said. “The conditions are very bad, there is often very limited actual engagement at the level of casework…what needs to be done is to try and close that gap.”

Displacement due to conflict and/or resulting from a natural disaster is one of the most significant global phenomena of our time. A staggering 43.7 million people have been uprooted by conflict and persecution worldwide, and it is estimated that an almost equal number have been displaced by natural calamities. Most of them are internally displaced people (IDPs) who, by definition, were forced from their homes but remained within their own national borders as opposed to refugees who fled across borders. Africa alone has 12 million IDPs, five times the number of refugees there.

While refugees fleeing persecution and conflict are protected under international law by a well-established legal framework, there was, until recently, no legally binding instrument covering the needs of IDPs. The Kampala Convention on Internally Displaced Persons, Returnees and Refugees in Africa, adopted at the African Union’s Special Summit in Kampala in October 2009, will fill this gap soon, needing only one more ratification to achieve the fifteen required for its entry into force.

Panelists at the IPI event highlighted the crucial importance of the Kampala Convention as a groundbreaking instrument imposing obligations on states to care for their displaced population, while providing them with concrete measures to facilitate protection of and assistance to IDPs.

Mr. Okoth-Obbo explained that, “Both in its words and the process from which the Convention made its appearance, it somehow depoliticized the IDP issue, from the province of state exclusivity, the sovereign right of states, etc., to one of legal mediation as the basis on which the plight of refugees would be addressed.”

Previously, he said, “One of the greatest obstacles that we ran into, in doing basic things, in helping people who are in distress…we always ran into this wall of state sovereignty, as a wall that we could not overcome. The Convention lowers that wall, in cementing state sovereignty not as a barrier beyond which we cannot look, but as a responsibility to help people in distress.”

Chairing the event was Ambassador Jarmo Viinanen of Finland, who, in his opening remarks, said that, “IDPs are frequently among the most vulnerable people in humanitarian crises. My own country, Finland, is truly committed to promoting the rights of internally displaced people. We strongly support the Kampala Convention and the plan of action for implementing this.”

Ambassador Ayebare reminded the audience that 33 state signatories, with 14 who have already ratified, indicated that there is real political commitment to implementation and that “this Convention shows that Africa is taking the lead in norms-setting, norm-creation.”

Drawing on the lessons learned from her own country’s IDP crisis in 2008, Ambassador Ojiambo said, “For us, the challenges are registration of IDPs, their profiling–that’s data collection and its management–and also assisted living and protection programs, as well as prevention and mitigation of internal displacement.”