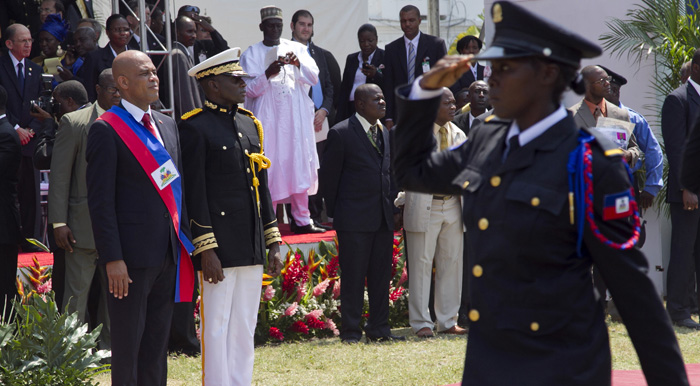 President Michel Martelly (left) during his inauguration ceremony in May 2011. UN Photo/Victoria Hazou

President Michel Martelly of Haiti was widely expected to announce the creation of a new Haitian army on November 18, 2011. Instead, the newly-elected president called for the creation of a civilian-led commission that will have forty days to finalize a plan for the army, which was disbanded in 1995. A draft of the “Martelly plan,” dated August 2011, called for building an army of 3,500 troops that would be operational within three years and progressively take over as the UN peacekeeping force MINUSTAH withdraws.

This issue brief by Arthur Boutellis, IPI Senior Policy Analyst, provides a background to the security sector in Haiti and explores the shape that a new Haitian army might take. It addresses the political context in which the army will be reinstated, financial considerations for the government of Haiti, and the role that the international community could play to support Haitian efforts to build an accountable security sector.