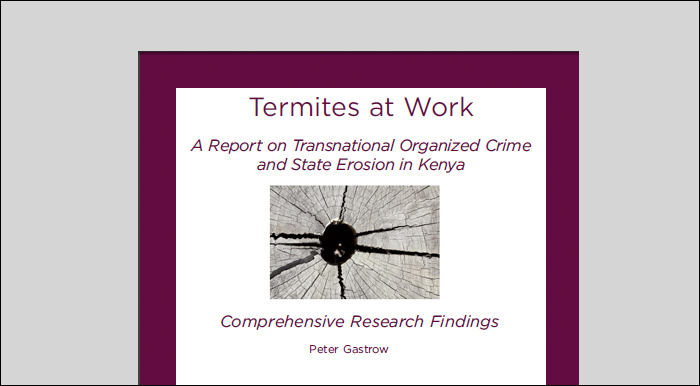 The threat posed by organized crime is not confined to serious crimes such as racketeering, the global drug trade, or human trafficking. For many developing countries and fragile states, powerful transnational criminal networks constitute a direct threat to the state itself, not through open confrontation but by penetrating state institutions through bribery and corruption and by subverting or undermining them from within. This paper examines whether Kenya faces such a threat.

Governments that lack the capacity to counter such penetration, or that acquiesce in it, run the risk of becoming criminalized or “captured” states. The research findings do not justify Kenya being labeled a criminalized state, but its foundations are under attack. Determined interventions are required to stem organized criminal networks from further undermining the state.

Six categories of transnational organized crime are examined, pointing to significant increases in criminal activity with pervasive impacts on government institutions in Kenya. Rampant corruption in the police, judiciary, and other state institutions has facilitated criminal networks’ penetration of political institutions.

This book-length report concludes with recommendations for steps to be taken at the national, regional, and international levels.

About the Author:
Peter Gastrow is Senior Fellow and Director of Programs at the International Peace Institute. He was previously Cape Town Director of the Institute for Security Studies (ISS). He is a former member of the South African Parliament, where he concentrated on justice, policing, and constitutional matters, and he has subsequently served as an expert adviser to the South African government and as a member of various expert groups and panels of the United Nations Office on Drugs and Crime (UNODC).

Read about the launch event >>