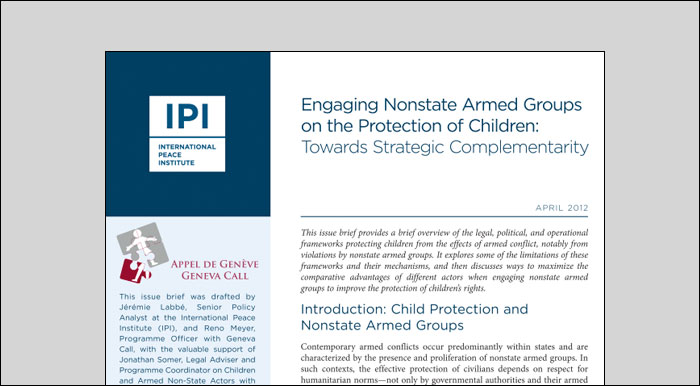 This issue brief provides an overview of the legal, political, and operational frameworks protecting children from the effects of armed conflict, notably from violations by nonstate armed groups. The UN Secretary-General has repeatedly emphasized the need to “more consistently and effectively engage non-State armed groups in order to improve their compliance with the law,” including international human rights and international humanitarian law. This is of particular importance with regard to child protection as armed conflicts have far-reaching impacts on children, who are among the most vulnerable members of society.

The issue brief explores some of the limitations of these frameworks and their mechanisms, and discusses ways to maximize the comparative advantages of different actors when engaging nonstate armed groups to improve the protection of children’s rights.

In part of the conclusion, the authors write:

“A concerted and strategic use of complementary approaches, including those outside of the monitoring and reporting mechanism (MRM) framework, would contribute to improved protection of children from the effects of armed conflicts. Such “strategic complementarity” would help maximize the comparative advantages of each actor for different purposes: to overcome access problems, notably when the states concerned are opposed to the UN’s engagement with nonstate armed groups; to develop specific responses tailored to the characteristics and sensitivities of each nonstate armed group; and to offer alternative approaches to overcoming nonstate armed groups’ perceptions of some actors’ bias in particular contexts. Such alternative approaches already exist but are seemingly overlooked in the MRM framework. Better interaction with actors operating outside the MRM would respond to the legitimate concerns of duplicating efforts and sending mixed messages on the applicable standards.”