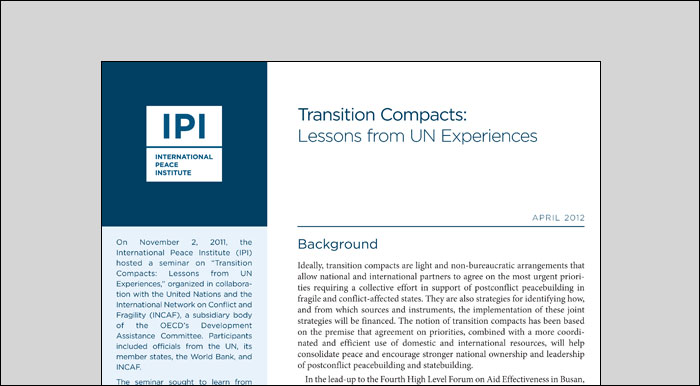 This meeting note captures the proceedings at a seminar on November 2, 2011 on “Transition Compacts: Lessons from UN Experiences.” The seminar sought to learn from previous agreements on peacebuilding and development priorities between national governments and international partners in fragile and conflict-affected states.

During the meeting, the International Peace Institute presented a study on United Nations experiences with this first generation of “transition compacts,” a summary of which is included at the end of this note.

(For the full findings, see the IPI report “Aid Effectiveness in Fragile States: Lessons from the First Generation of Transition Compacts.”)

The seminar was hosted by IPI and organized in collaboration with the United Nations and the International Network on Conflict and Fragility (INCAF), a subsidiary body of the OECD’s Development Assistance Committee. Participants included officials from the UN, its member states, the World Bank, and INCAF. The meeting was convened under the Chatham House rule of nonattribution.